The Gokak Falls is a waterfall located on the Ghataprabha River in Belgaum district of Karnataka, India. The waterfall is six kilometers away from Gokak, a nearby town. 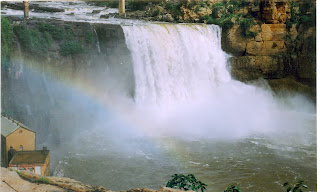 After a long winding course, the Ghataprabha river takes a leap of 52 metres (171 ft) over the sand-stone cliff amidst a picturesque gorge of the rugged valley, resembling Niagara Falls on a smaller scale. The waterfall is horse shoe shaped at the crest, with a flood breadth of 177 metres (581 ft). During rainy season, the thick reddish brown water sweeps far over the brink of the cliff with a dull roar that can be heard from some distance. There is a hanging bridge across the river, measuring about 201 metres (659 ft). Its height above the rock bed is 14 metres (46 ft). 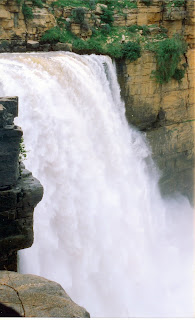 One of the interesting features of this place are the monuments from the Chalukya era that are present on either banks of the rocky gorge.
There is an old electricity generation station which used to generate electricity during 1880s. A ropeway connects the power station to the cliff top.
July to September is the best season to visit the place. The Gokak Falls can be developed into a fine tourist attraction.
Nearest Railway Junction
• Miraj - All express and superfast trains stop at Miraj station. You can then take another train from Miraj which halts at Gokak or Ghataprabha stations. 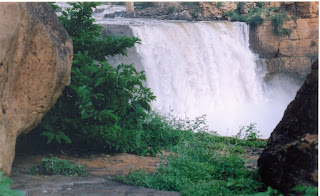 Nearby Railway Stations
• Gokak Road - only few trains stop here
• Ghataprabha - few express trains stop here
It is recommended that passengers get down at Miraj junction and then take another train from Miraj which stops at Gokak or Ghataprabha stations.
Godchinamalaki Falls 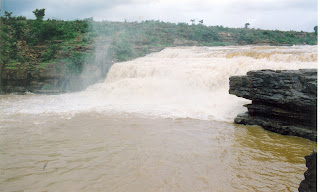 The Godachinmalki Falls is a waterfall located on the Markandeya river in Belgaum district, Karnataka, India. It is 16 kilometers away from Gokak and 40 kilometers from Belgaum, a nearby town. It is located in a deep green valley on the west side of Konnur Road.

The Godachinmalki falls, also known as Markandeya falls, is located in a rugged valley, which is approachable from Godachinmalki village by walking through an irregular forest route for about 2.5 kilometers. It can also be reached from Nirvaneshwara Matha near Yogikolla, only by foot. Another route is from Pachhapur via Mawanur, which is about 6 kilometers. Presently this water fall is not easily accessible.


There are actually two falls formed here. The Markandeya river takes a first fall from a height of about 25 metres and flows into a rocky valley. After a short distance from the rocky valley, it takes the second fall from a height of about 18 metres. Later Markandeya river joins Ghataprabha river near Ghodgeri. Within the 6 km of radious there 2 Dams one built on ghataprabha river(hidkal dam)and one Markandeya river. The best time to visit these places is from June to September
Posted by VISWANATH S at 12:57 PM