EXPEDITION TO MOUNT EVEREST BASE CAMP-1996

DAY I JIRI to DEORALI 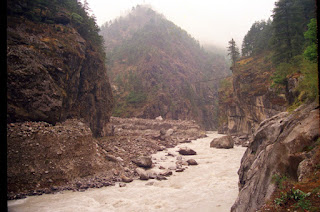 Early in the morning started trek to reach BHUNDAR in mind. From Jiri we followed a trail leading up the east side of the valley, passed KHARUBA pass at an eight of 2713m. From the pass we descended towards YELUNG KHOLA – crosses suspension bridge over KHIMTI KHOLA to reach SHIVALAYA(1,800m) – Had Lunch – All along the trek we came across some rhododendron forests, specular feature of this trek. North of the Mohabir village through forest we had an fine view of side streams with windmills, reached BULDAR PASS (2713m)-Maniwalls and prayers flags, an uphill task to reach DEORALI at 5.30 PM rain started – decided to stay at Deorali. 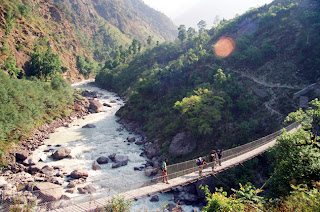 Left early morning at 5.30 AM – an downhill through a sylvan forest of oak and rhododendron, passing large religious shrine into a beautiful vally that truly marks the start of SHERPA country. The village of CHYANMGA (BHANDAR). We met one local school teacher he had taken some initiative some projects including power generation to his house through the following stream which confluence with HIM GANGA river. The village of Bhandar we found a mixture of TAMANGS and MEWERS – descended through forest again with terraces to reach PHEDI a CHETRI village – crossed suspension bridge walked along river HIM GANGA to reach KINJA (1,634m). In Kinja we found school, a police checkpost and dispensary. Again an uphill steep climb from the Kinja follows a trail with oak trees and rhododendron forest to reach SETE (2,575m) at 5.40 PM – Weather was very chilled The village SETE is covered with clouds as we had to stay. 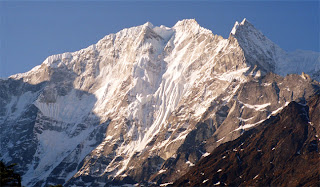 Left same timings – an uphill route to DAKCHU –view of Number Range – reached KATHA BASAUNI – This day we had to cross LAMJURA Pass (3530m) through uphill task of oak and greeny coloured these along with pine trees, trail follows the line of ridge passing several houses. Pass marks entry into the SOLU KHUMBU region. We had a feel, sense of pleasure when we reached LAMJURA pass (Gateway to Mountains) – weather was getting bad decided to descend to reach TAK TOR through a thick forest of fixed fir to reach AM Lodge one of early batch friend Mr. GP Sherpa of TAK TOR – Had lunch – As soon as we left the TAK TOR heavy rain started on the route to junbesi downhill reach camp JUNBESI at 4.30 PM – because of offseason we couldn’t get the accommodation because all the lodges in junbesi village were closed finally we got one lodge and stayed JUNBESI – (2575M) – A large Sherpa village with its monastery and school built by Sir Edmund Hillary. We can have a view of JUNBESI KHOLA to the south of NUMBER Range (6959m). 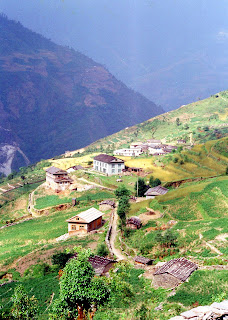 Crossing a small bridges at 5.30 AM – an uphill upto PHURTYING – Valley of Beni Khola – reached Solung plain trek upto Ringmo (2,005m) – a steep climb upto the lank of Kenche Danda till TRAKSHINDU pass – had lunch at trakshindu village- a Gompa (Monastery) 50 years old set up in 1946 and a school downhill to rach Nunthala (Manidingma). 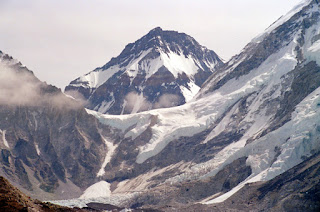 Downhill through thick forest and terraces – view of langur monkeys – crossed suspension bridge across river DUD KOSHI – climbed and uphill to Juving (A RAI Settlement) path meanders through stands of bamboo near the house – trail continued to reach KHARI KHOLA – Had Lunch-predominentally a village of of Sherpa and Magyar inhabitants. An uphill and tough steep climb to reach BUPSA – in the last stretch to reach our camp a landslide occurred, village people are clearing the place to the use of trekkers – met UK National – visited old monastery

Left BUPSA to reach Phakding – a stream and thick forest with a mixture of oak, pine bamboo and pirch-trail continued and reached Puyivan (2,800m) slowly rising on the flank of the Sebuk Dhanda to Chutok La – pass accessed to Hinku Valley – a descending nearly 600-700 mts to reach SURKYA (2,300m) – Rain started heavily while getting down to SURKYA – Had lunch-minor injuries to all in the rainshed area- towards north we moved on the main trail which traverses a gorge with a waterfall- again rain started heavily before we reached CHAURI KHARKA (2,652m) and decided to halt at this point because of the bad weather and all the members of the team were tired and exhausted. 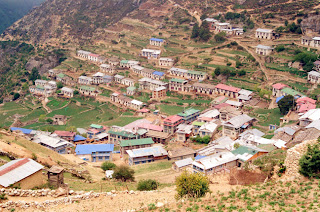 Reached Cheplung all along the river Dudh Koshi – the trail for Lukla joins here from Chaurikharka and them we moved to Phakding-plain trek crossing rickety, cantilevr bridge – a fine view of TAMSHERKU peak. Had breakfast – reach Tak tok- a gradually uphill climb not so steep to reach Benkar- to reach Namche the trail continues to a Benkar and eventually cross back to the east bank on a makeshift cantilever log bridge and new suspension bridge built by HMG under the Swiss – then trail continued upto the east bank crossing again Dudhkoshi by a large Sagarmatha National Park – reached Jorsale had lunch – very tough climb starts to reach Namche crossed again a wooden bridge joining another river along with Dudhkoshi- tiresome trek to reach NAMCHE (3446m). Hired Sleeping Bag, Jackets and other needful for higher camp.
DAY VIII NAMCHE to THYANGBOCHE 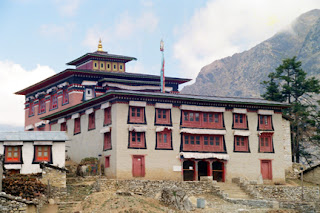 Path forks left from the Sagarmatha National Park- north east of Imja Khola – valley is heavy deforested and grazed with cultivation – open hillside covered with somewhat sweet smelling dwarf rhodendrons, alpine trees and berberies – reached KYANJUMA – we had a iew of TAMSHERKU, Kusum Kanguru and Kangtage way to striking form of sitting phantom – MOUNT AMA DABLAM – the mountain is at her benign, snding down the ridges like welcoming arms. Crossed a small wooden bridge below the river – we descended through past large boulders- crossed stream dn meet the path – reached Sanasa – the place to pass to peak GOKYO – then continued through all along the pine and past forest nursery funded by Sir Edmund Hillary Foundation under SPCC – crossed a small bridge near Phungi Tanga – n army base to protect Sagarmatha national Park – met jawans nearly 500-600 m steep climb through a marvelous and fantastic woods of pine, juniper and fir with rhododendron – reached THYNAGBOCHE(3875m).

Monastery: The Gompa was destroyed by earthquake in 1934 and then in 1979 it was again destroyed by fire now at present it was rebuilting with the help of WWF and other individual donors. 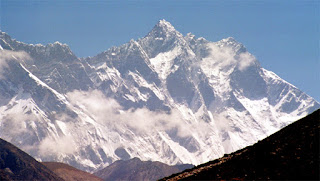 Trail pass down the stream and descend through a haunting wood of juniper curly barked silver birch – we had a view of Musked Deers, mountain goats and pheasants continued our trail through an opening door arch to small notch between large builders- divides path to Pangboche- here a 300 years old monastery had a YETI SCALP then we moved after climbing an uphill and downhill and plain trek to reach Pheriche crossing a small wooden bridge it was very windy – view of Mount Lobjue East – a main street on both side with stonewalls enclosing houses and lodges. It was the last Sherpa village and one large building where HRA exists (HIMALAYAN RESCUE ASSOCIATION) – we decided to visit to know about AMS and other mountain problems, it was winding up the camp there because it was the end of the season. It is a domination of Tawache and Cholatse – extra day is necessary for those who couldn’t get acclimitised for mountain weather to reach higher camps. –trail leads of valley on both sides with snow cap mountains – terminal moraine at the snout of the rubble covered KHUMBU Glacier but it was fully rocky moved all along the rock path to reach DUGHLA.

DAY X DUGLHA to GORAKSHEEP
Trail levels out and chortens (samadhi’s) stands an uphill climb to have scene of memorial to sherpa and other mountaineer killed on Everest –climbed along lateral rocky path again of Khumbu Glacier and reached Lobuje (4887m) – only few hotels were operating because of unseason. Had breakfast – a best and ideal place to climb LOBUJE EAST weather was fine spent nearly one hour in Lobuje – amid huge moraines and grand peaks-last habitation before Base Camp of Everest – then continued our trek with rocky path while we are moved towards Goraksheep – some of HRA aids and Sherpas were bringing one dead body from Everest Base Camp to dig in Lobuje – we are came to know the disaster in Mount Everest that renowed climbers like Scott Fischer of US and Rob Hall of New Zealand and others has been killed after summiting their expediton. Some Expedition teams including from ITBP (Indo – Tibet Border Police) climbers have also died during their descent – we reached Goraksheep at 2.30 a slight headache appeared to all and then acclimitised and decided to summit Kalapathar Next day – the Grand Finale. 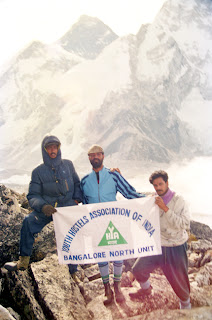 It was came to know that since two days back there is no view of Mount Everest from Kalapathar, the hotel boy has informed to leave at 7.30 AM but we decided to leave at 5.30 AM in the morning as soon as we are climbing Kalapathar peak we got tired and exhausted because lack of oxygen we had 5 minutes walk and 10 minutes rest. Finally reached Kalapathar at 7.00 we had a nice view of Mount Everest took photographs as soon as we are getting down the clouds are moving in valley as if we are in KAILAS PARVATHA. As time is moving EVEREST is covered with full clouds not even our team members are visible on the Kalapathar – we came back very fastly, because we had in mind of getting weather even worse it was very chilled. Had breakfast –left Goraksheep at 10.30 am – reached Pheriche at 12.20 pm had lunch and reached Thyangboche at 6.00 pm. 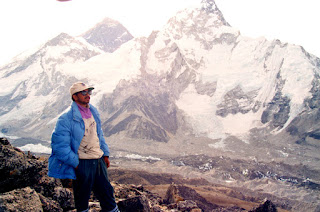