I had been to Bhadra Wildlife Sanctuary, Muthodi along with my fellow Photographers Friends Satish H, Sateesh.N (Finance Dept, Vidhana Soudha) and myself and also accompanied by Sudhakar, Nagendra (Superintendent, BHS) and Umesh (RGUHS) from 24th November to 26th November 2010,
DAY 01 : 24th November 2010 :
Left early morning from Bangalore, all the friends met at Sri Sudarshan Residence along with his Innova we moved towards Kunigal via Magadi had a beautiful breakfast (idli Vade, and famous Kali Dosa) at Hotel Parimala, Kunigal and from there we moved towards Chikamaglur and met Vishwanath Friend Sri Satish from Chikamagalur had Lunch at Food Palace and bought some Coffee, Tea Powder and Vegetables, reached Bhadra Wildlife Sanctuary by 2-30 pm met Shashi (Forest Guard) and stayed at Sighe Khan Estate Guest House and we had a safari at 4-30 pm with Dept Vehicle, we had been to Big Teak Tree
Brief Info on Big Teak Tree 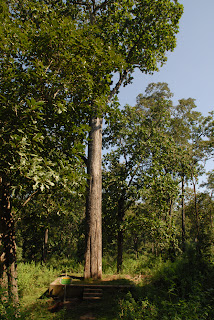 Bombax ceiba or Boorugada mara is seen en route to Mavinahalla in Lakkavalli range. The tree is more than 200 years old and has a 32 feet trunk. It provides food for squirrels during summer. 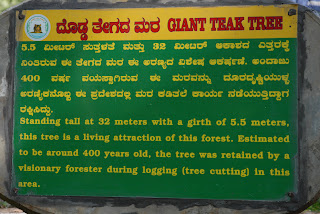 Terminalia Tomentosa or Matthi mara is found in Balegundikere in Thanigebailu. The tree has 22 feet trunk and is 300 years old, says environmentalists.
Teak wood is found en route to Kesave from Muthodi. The tree is 400 years old and has 17 feet trunk. 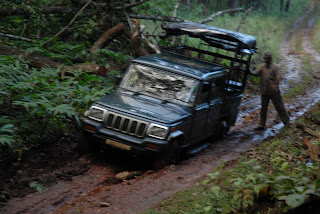 as it was heavy rained two days back all the route was very horrible even 4W Drive was not so easy to travel, we had struck down at few places in the middle of the jungle and our dept vehicle also strucked and we had a experience of that in this trip, finally we came back to Nature Camp and had tea and having dinner at Sighe Khan Guest House and we gone with the sleep
﻿﻿ 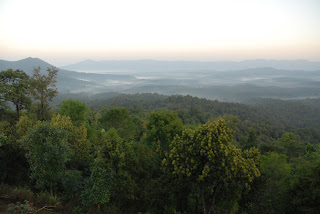 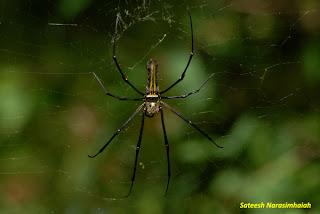 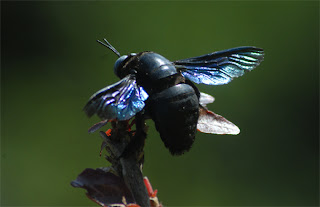 A diverse range of wildlife is found in the sanctuary like bison (Gaur), Elephants, Tiger, Leopard, Sambar, Chital spotted deer, Boar, Porcupine, Muntjac, birds like the Peacock, Parrot, Partridge, Pigeon, Munia and Bee eaters, and reptiles such as King Cobras and Indian Rock Pythons. More than 250 species of bird life, many of which are widespread to the Western Ghats, are spotted here. Marsh crocodile, flying lizard, monitor lizard and different kinds of snakes are some of the reptiles found here. October to February is best time to visit Bhadra Wildlife Sanctuary.

Day 02 : 25th November 2010After having morning Tea and bath, we trekked from Sighe Khan Guest House to Nature Camp (3 Kms) and glimpses of backstream around Nature Camp, had breakfast, met RFO and Forest Official and thanked them for their co-operation and moved towards Kemmanagundi, enroute we had a fine pictureseque landscapes, enroute we had been Seethalayana Mutt and had darshan over there
﻿
﻿ 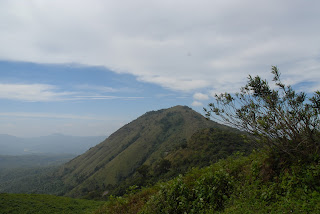 ﻿
﻿ and reached kemmanagundi at 2-30 we stayed at Forest Dept Guest House, (nice one) and Meti was waiting for us, we had a lunch over there and hired a Jeep for Hebbe Falls, (Horrible Jeep and Ride-No Break,Nothing-Seniority wise we got that jeep) and driver was quite experienced in that route safely he landed us near the gate of Hebbe Falls (RANSH ESTATE), and we had to trek about 1-2 kms to reach Hebbe Falls, had good photographs over there

Kemmannugundi Kemmannugundi (Kannada: ಕೆಮ್ಮಣ್ಣುಗುಂಡಿ) is a hill station in Tarikere taluk of Chikkamagaluru district in the state of Karnataka, India. It is located at a height of 1434m above sea level. This was the summer retreat of Krishnaraja Wodeyar IV and as a mark of respect to the king, it is also known as Sri Krishnarajendra Hill Station. Ringed by the Baba Budan Giri Range and blessed with silver cascades, mountain streams, and lush vegetation, Kemmangundi’s beautifully laid-out ornamental gardens and enchanting mountains and valleys views are a treat to the eye. The spectacular sunset view from the Raj Bhavan is a photographer’s delight. For the adventurous at heart, Kemmangundi offers many peaks to scale and intricate jungle paths to explore

Transport
Road
Kemmannugundi is about 53 km from Chikkamagaluru and 20 km from Lingadahalli by road. The nearest National Highways, NH-206 or NH-48, connect to Bangalore. There is another route to reach which is via Mullayanagiri, a scenic drive.
Rail
The nearest railway station is 35 km away at Tarikere.
Air
The nearest airports are at Mangalore (150 km) and Bangalore.

Kemmannugundi was established as the summer retreat of Krishnaraja Wodeyar IV. He later donated this resort to the Government of Karnataka. The Horticultural Department of Karnataka now develops and maintains the resort and its surroundings.


Z point
﻿﻿
﻿﻿ Z point is a vantage point at Kemmangundi and can be reached by a steep uphill trek of about 45 mins. from Raj Bhavan and is another favourite place of people who want to view a spectacular sunrise . As it is a walk beware of slippery roads and snakes and also visit shanthi falls nar kemmangundi

Shanthi Falls
Rose garden
Rose garden, as the name suggests is a garden of roses maintained by the Horticultural Department. Various varieties of roses are cultivated here.

A downhill trek of about 8 km from Raj Bhavan takes one to Hebbe Falls where water streams down from a height of 168 meters in two stages to form Dodda Hebbe (Big Falls) and Chikka Hebbe (Small Falls). Jeeps are available from one particular point to Hebbe falls and they charge around 700/- to 1200/- (for up and down depending on no of persons). We can take a trek if you have enough time. 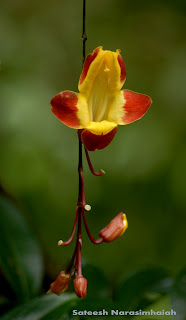 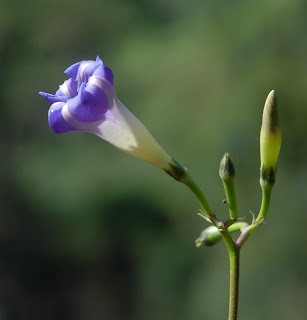 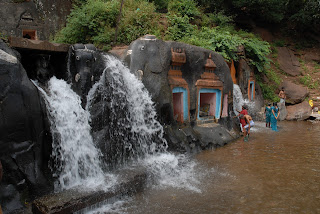 Kallathi falls is about 10 km. from Kemmangundi. On the road from Kemmangundi to Tarikere, a deviation takes one to Kallathi falls. It is also known as Kallathigiri falls and Kalahasthi falls. Water cascades from a height of 122 metres and the temple here is attributed to times of the Vijayanagar empire. According to a local legend, this place is associated with the Hindu sage, Agastya
Kalhatti Falls or Kalahasti Falls is located at Kallattipura in Chikmagalur district of Karnataka. The waterfall is only 10 kilometers away from Kemmangundi hill station. It offers an excellent view of the cascading water from the Chandra Drona Hill from 122 meters (400 ft) above in front of the Veerabhadreshwara Temple dedicated to Lord Shiva.
The Legend
Legends say that sage Agastya had prayed for a long time in this place.The Veerabhadra temple is supposed to be built in the Vijayanagar times. The temple is with three stone carvings of three elephants at the entrance. Water cascade water over these elephants and devotees believes that these waters have the power to cure diseases.
An annual fair of Lord Veerabhadra is held here for three day during March/April which attracts pilgrims from many parts of the state.
Its also hot spot among the trekkers who carry out their trekking exercises on the adjoining hills and mountains. Trekkers climbing along the mountainous terrains enjoy the picturesque view. With base in Tarikere which is 35 km from Kemmangundi, trekkers climb the hill slopes to enjoy the panoramic view of the verdant valleys below.
Location
Kalhatti Falls is located one hour from Birur (Birur - Kadur Taluk in Chikmagalur District). Birur is near Kadur, between Arsikere in Hassan Dist and Bhadravathi in Shimoga Dist. From Birur, Kalhatti is accessible through Lingadahalli.
Distances from Kalhatti Falls
1. Kemmangundi: 10 km
2. Bangalore: 245 km
3. Mangalore: 180 km
How to reach
• Nearest Railway Station: Birur
• Nearest Airport: Mangalore
• Nearest International airport: Mangalore
The route from Bangalore is through Tumkur - Tiptur - Arsikere - Kadur - Birur on NH206. The road from Birur to Lingadahalli is about 15 km from there, there is a fork whose left arm goes to Santaveri and continues towards Chikmagalur and the right arm goes towards Kalhatti falls and Kemmangundi.
How to get there: Birur is a junction well connected on the Bangalore-Shimoga, Bangalore-Kolhapur, Bangalore-Hubli or Yeshwantpur-Vasco routes. The Shimoga Express leaves Bangalore at 2310 and reaches Birur at an unearthly hour of 0315. Buses from Birur towards Lingadahalli are at 0545, 0630 and quite regularly after that. These buses take about 30 mins. You can hire private vehicles to take you till Kalhattigiri (another 30 min. ride on road)from where you can begin the trek.
Accommodation:
Accommodations are available at Horticulture Guest House, Kalhatti falls