The team for this tour was Myself, Sateesh,  Rajendra, Pradeep,(all from Vidhana Soudha) Umesh (RGUHS) and Driver Anand 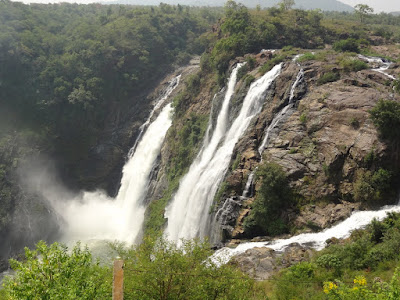 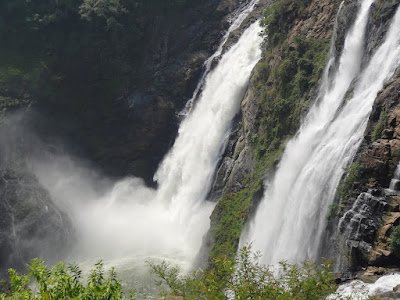 At 8-00 am reached Bidadi had Thatte Idli, Vade at Shivadarshini Hotel (famous for Thatte idli) it was heavy rush over there after having breakfast proceeded our journey, enroute we visited gaganchukki falls and captured some glorious pics of waterfalls and reached Kollegal by 12-30 pm and called Sri Udayakumar, ACF, he informed that he will be reaching Kollegal by 3-00 pm, then we decided to visit Rajendra’s Native at Ummathur which is nearby from Kollegal reached his residence had tea over there and visited the 800 years old temple named Sri Ranganatha Temple, Sri Bhujangeshwara Temple, Jain Temple and Hanuman Temple over there and had lunch by 2-45 pm and moved towards back to Kollegal where our ACF was waiting to accompany us to Burude Forest Guest House. 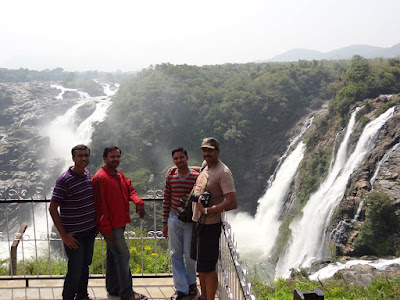 Ummathur is a village in the southern state of Karnataka, India.This historical village was once a capital of Ummathur king during the Vijayanagara Empire. It is located in the Chamarajanagar taluk of Chamarajanagar district in Karnataka 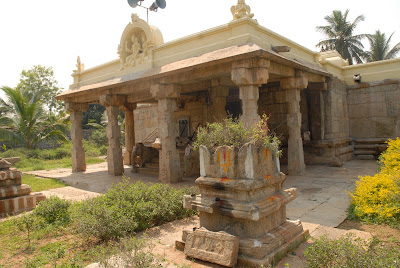 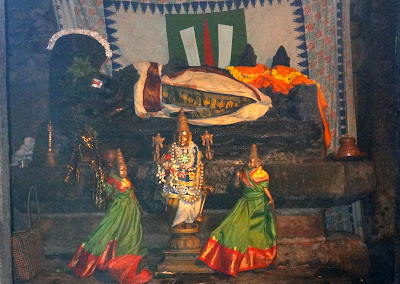 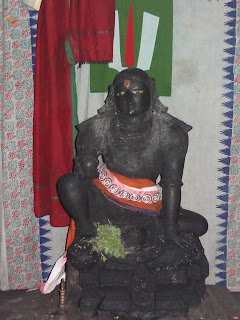 Ummathur, got its name thanks to its village diety Shri Urukatheshwari, apart from this diety, Ummathur has a Shiva Temple, a vishnu temple, a Jain basdi.
Even though there are many temples in Tamilnadu , it is seldom that you find a Shiva and Vishnu temple next to each other as you do it in Ummathur. Vishnu temple is Shri Ranganathaswamy Temple, whereas Shiva temple is Shri Bhujangeshwara Temple. Both temples have style of Hoysala architecture.
This is a beautiful adobe of Ummathur Bhatta Family. Late. Sri Rajagopala Bhatta, Famous Aagamik and served as a Post master for this Branch Post office Ummathur, flanked by his 5 sons and 3 daughters. His 3rd Son Lakshminarayana Bhatta, Famously known as Nanappa serves now as Post Master, Ummathur and he take cares of Ranganatha Swamy Temple
How to reach by public transport:
From Mysore: Go to Nanjangud ( 45 to 60 Minutes) , Take Chamarajanagar Bus, that goes via Ummathur. (60 to 90 Minutes). From Kollegal: Go to Santhemaralli (40 to 60 Minutes), you can either take a bus (you should be very lucky to catch one) or there are many Auto rickshaw plying between Santhemarralli and Ummathur. 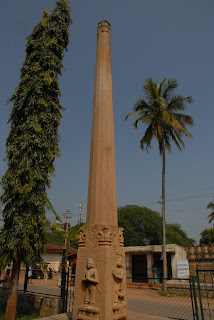 How to drive to Ummathur: If you are travelling from Mysore, go to Nanjangud, and take Chamarajanagar road (there are many routes please make sure you are taking Ummathur road- ask any passerby).
If you are travelling from Bangalore, go to Kollegal, then proceed towards Chamarajanagar, after Yelandur town you will hit Santhemaralli ( a junction), take straight road in the high mast lamp circle, Ummathur is around 20 minutes drive from here.
From there we reached back at Kollegal by 3-45 pm and called ACF , he was at Aranya Bhavan, DCF Office, Kollegal we met RFO Bylore purchased provisions for night dinner at kollegal and along with ACF reached the main north side entrance of BRT Sanctuary at the forest entry gate and took some snaps of Sunset view along with Gundyal Dam Mr. Dasappa Guard accompanied us nearly some few minutes later we found a turtle on the road, we had some snaps and while travelling the route we found a huge Bisons reached our Burude Camp by 7-30 pm umesh prepared the dinner and we had a chat with ACF and gone to the bed. 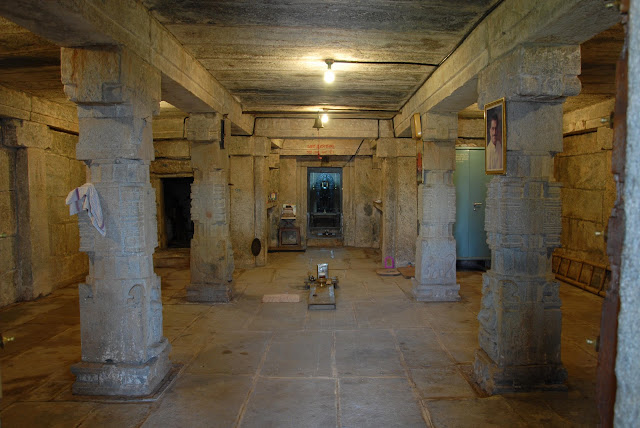 Next day early morning at 6-30 am we trekked to Doddasampige Tree (4 kms) from Burude Forest Rest House reached over there, there were tribals (Soliga’s) near there called PODU, the tribes were moving from there with some items to sell at MM Hills, we captured few various moments over there and returned back to Burude FRH at breakfast, we left the place thanking all the forest guards who had helped over there during our stay, while coming back at Forest Entry Gate, we had a nice view of Eagle (name to be identified) got some good snaps and reached Kamagere, ACF had some personal work he travelled to Mysore from there, we proceeded towards Gopinatham enroute MM Hills, vishwa lost his mobile while taking a pic of motorcycle and cycle with a rope- reached Gopinatham by 5-30 pm as ACF instructed the concerned over there to take care of us and to accommodate at Mystery Trails Camp earlier it was Forest Dept’s now it has been handed over to JLR, as it was a weekend all the rooms and dormitories were full, we couldn’t get the accommodation, finally caretaker of JLR- Mystery Trails informed that only one room and dormitory were there you can stay over there (Dormitory per head Rs. 400/- Lunch/Dinner Non Veg 250, Veg 150 and room charges per head Rs. 1000), as it was heavy for us we called ACF to arrange alternate at PALAR Forest Rest house, we reached Palar Forest Rest house by 8-00 pm, Mr. Mahadeva who was caretaker over there helplessly told there were no food for dinner, if you need Dinner you should go near Govindapalya(TamilNadu), 5 Kms from the State Border we proceeded over there had 6 meals Parcel and came back to Palar RH had dinner and slept……..
Information about Doddasampige

Dodda sampige is located four kilometres away from B.R. Hills. One has to take the road to Chamarajanagar from B.R. Hills to reach Dodda sampige. It is one of the most interesting places around this area. The approach to this place is rather difficult. This is because of an irregular forest route. There is a deep valley through which a pathway leads to the Attikan estate (a private estate). Here flows a large stream named Bhargavi, a tributary of the Cauvery. This stream is known as an incarnation of Renuka, wife of Jamadagni, in the form of a river. Jamadagni is one of the most revered sages in Hindu mythology. The couple, Jamadagni and Renuka are believed to have lived here. 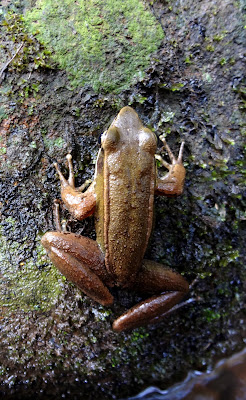 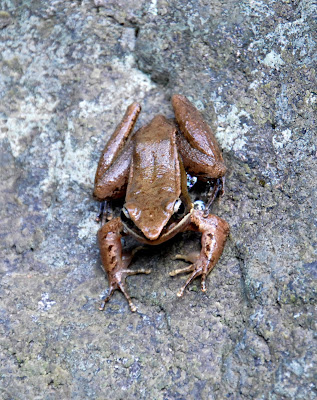 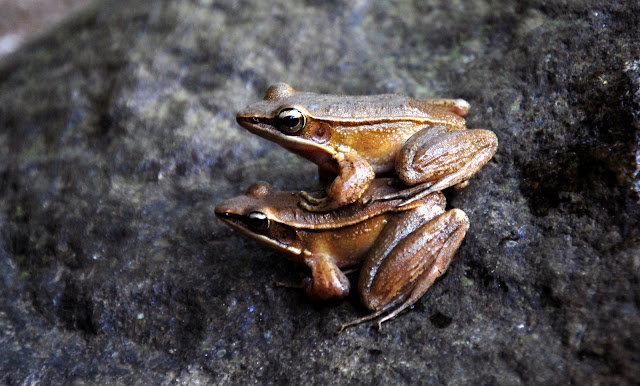 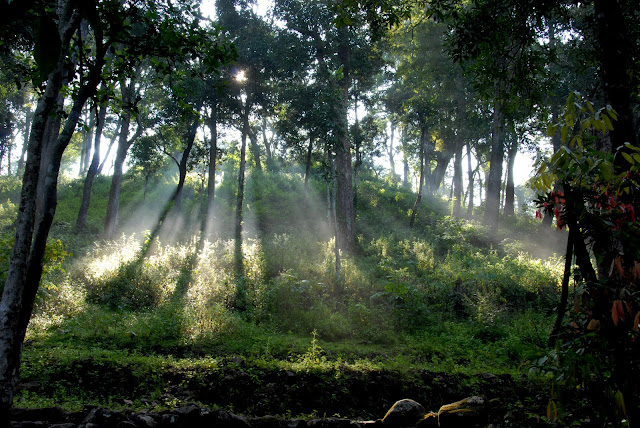 There are a large number of Champaka trees huddled together covering the area with a thick shadow. Near this group of trees to the east of the riverbank stands a gigantic champaka tree. It is 34 meters in height and the girth of trunk measures about 20 meters. The most amazing fact of this tree is that it is 2000 years old. Even today, the tree bears usual flowers of both red and yellow colour during April. On the east side of the platform around this tree are more than the 100 Lingas, which are worshipped by pilgrims who come here

Next day morning had bath over there by 5-30 am left the place reached enroute we had a fine glimpse of early morning sunrise and reacehd MM hills as it was Karthika Monday it was a auspicious day, had a darshan over there while getting down we searched for mobile where it was fallen, (no signal, out of coverage area), all the efforts have gone what we searched for mobile, we couldn't found it, finally via Thalbetta reached Hanur and had breakfast at Hanur and from there Malavalli-Kanakapura-banashankari and reached bangalore by 3-00 pm,

Malai Mahadeshwara Hills is a temple town situated in the eastern part of Kollegal taluk, Chamarajanagar district. The Lord Sri Mahadeshwara is the incarnation of Lord Shiva. It is a very famous Shaiva pilgrim centre. It draws lakhs of pilgrims from the states of Karnataka and Tamilnadu. The Lord Sri Mahadeshwara's miracles are beautifully sung by village folk in the janapada style. According to tradition there are seven hills identified in the puranas as Anumale, Jenumale, Kanumale, Pachchemale, Pavalamale, Ponnachimale and Kongumale. All these hills form M.M. hills

Mahadeshwara is the family god of the Soligas and other hill tribals including Jenu Kurubas, Kadukurubas etc. But, historical evidences suggest that saint Mahadeshwara must have lived during the 15th century. Further, he was the third head of the Haradanahalli Math. It is believed that Sri Mahadeshwara Swamy came here to perform penance. Folklore maintains that he is still performing penance in the temple's sanctum sanctorum in the form of a Linga. Sri Male Mahadeshwara Swamy moved using a tiger (as his vehicle) and performed number of miracles around the hills to save the people and saints living here. For more details on the legend, the temple and its activities etc. - www.mmhills.com.

Apart from being a pilgrimage, M.M.Hills possesses natural beauty in the form of large tracts of forest area. The height of the hill is about 3000 feet from sea level and is surrounded by 77 hills in eastern ghats. The beautiful landscapes of hills and valleys are covered with extensive forests. These forest types vary from evergreen forests in Ponnachi Boli to Dry deciduous forests in most other parts. M.M.Hills is bound by river Kaveri to the north-east and by river Palar to the south. Thus, it forms an extremely important catchment area for both these rivers.

The forests of M.M.Hills have been famous for wonderful regeneration and stock of sandalwood and bamboo. The forests are inhabited by a variety of animals, birds and reptiles. They are found in large numbers too. Elephants are the most prominent species.

Bangalore This last estimate puts the population of elephants at more than 2500 in the district, which includes Bandipur National Park too. Frequent sightings of guars (Indian Bison), sambars, spotted deer, jackals, sloth bears, porcupine, etc., apart from rare sightings of tigers, leopards and wild dogs are possible in and around this area. The Male Mahadeshwara Reserve Forests, has an approximate area of 39361.45 ha and has few small villages like Ponnachi, M.M.Hills, Kombadikki, Kokkebore, Doddane, Tokere, Tholsikere, Palar, Gopinatham, Nagamale, Indiganatham, etc., as enclosures within the reserve forests.