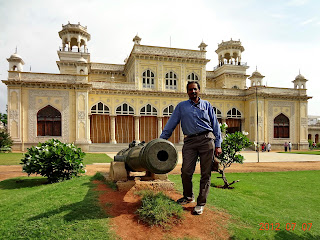 Hyderabad is a city with a history that reads like a love story and a past that sounds like a fairy tale.

Chowmahalla Palace or Chowmahallat (4 Palaces), was a palace belonging to the Nizams of Hyderabad State.

Once regarded as the center of Hyderabad, the magnificent Chowmahalla Palace was the seat of the Asaf Jahi dynasty where the Nizams entertained their official guests and royal visitors. Built over 200 years ago, Chowmahalla is renowned for its unique style and elegance.

While Nizam Salabhat Jung is credited with initiating the construction of the palace complex in 1750, it was Nizam Afzar-ud-Dawla Bahadur who ensured that it was completed between 1857 and 1869.

It is believed to be modelled on Shah of Iran's palace in Tehran.

Chowmahalla, which in its heydays had more than 7000 attendants, has been compared to the ‘Enchanted Gardens of the Arabian Nights’.

The Palace originally covered 45 acres (180,000 m2), but only 14 acres (57,000 m2) remain today. This Palace consists of two courtyards, southern courtyard and northern courtyard. They have elegant palaces, the grand Khilwat (the Durbar Hall), fountains and gardens.


This is the oldest part of the palace, and has four palaces Afzal Mahal, Mahtab Mahal, Tahniyat Mahal and Aftab Mahal.

It was build in the neo-classical style 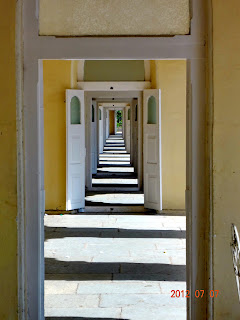 This part has Bara Imam, A long corridor of rooms on the east side face the central fountain and pool that, once housed the administrative wing. and Shishe-Alat meaning mirror image.

Opposite to the Bara Imam is a building that is its shishe or mirror image. The rooms were once the used as guest rooms for officials accompanying visiting dignitaries.

In the corridors of the Shishe-Alat was a group of ladies offering to decorate the hands of lady guests with Mehendi in different exquisite designs. There was also a photo studio set up by the Raja Deen Dayal family, famous royal photographers of erstwhile Hyderabad. Here guests could get pictures taken wearing the royal costumes provided. 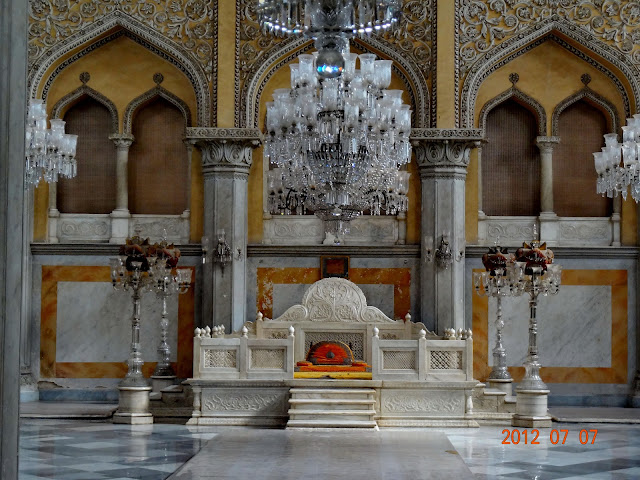 
This is heart of Chowmahalla Palace.. The grand pillared Durbar Hall has a pure marble platform on which the Takht-e-Nishan or the royal seat was laid. Here the Nizams held their durbar and other religious and symbolic ceremonies. The 19 spectacular Chandeliers of Belgian crystal recently reinstalled to recreate the lost splendor of this regal hall. 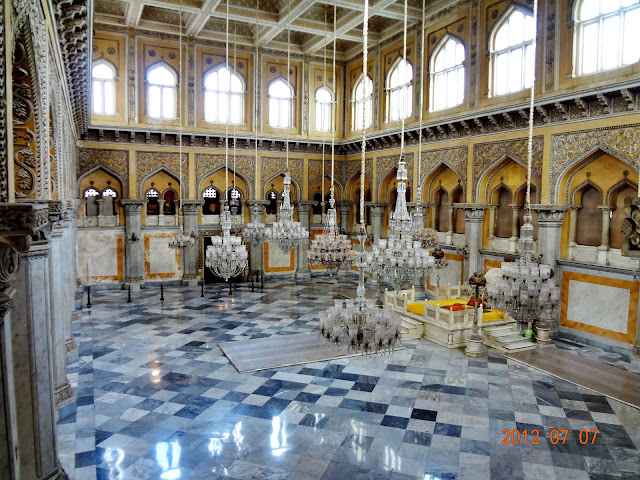 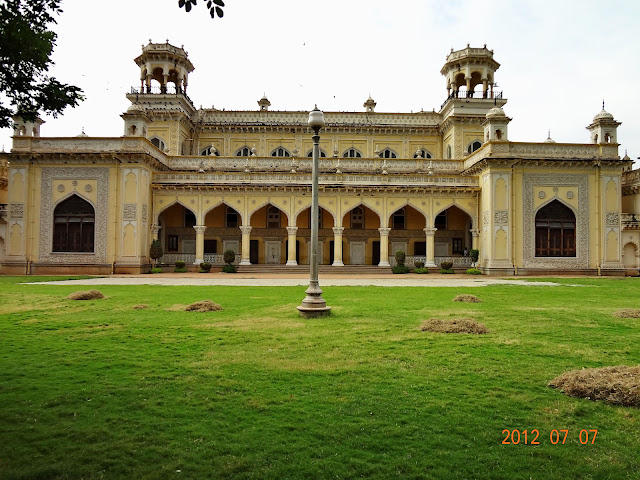 The clock above the main gate to Chowmahalla Palace is affectionately called as Khilwat Clock. It has been ticking away for around 250 years. 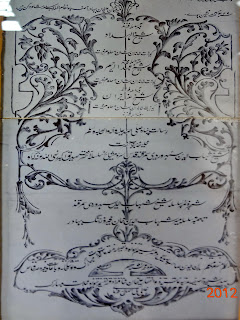 This building housed a rare collection of manuscripts and priceless books.The Nizam often met important officials and dignitaries here. Today it is venue for temporary exhibitions from the treasures of the Chowmahalla Palace Collection that offer a glimpse of a bygone era. 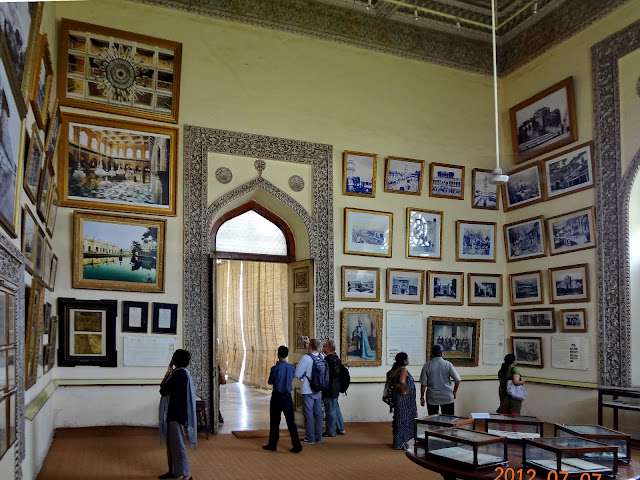 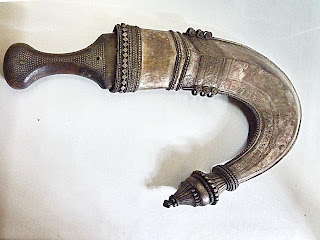 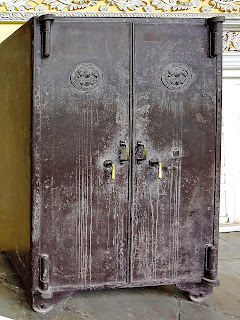 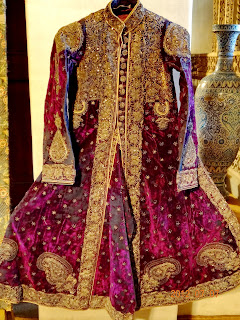 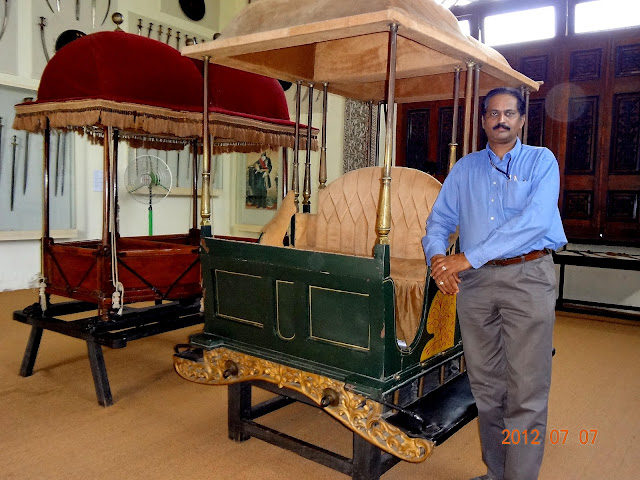 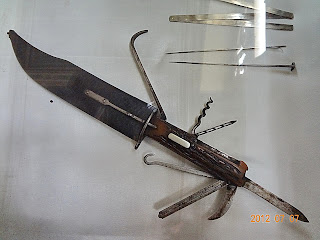 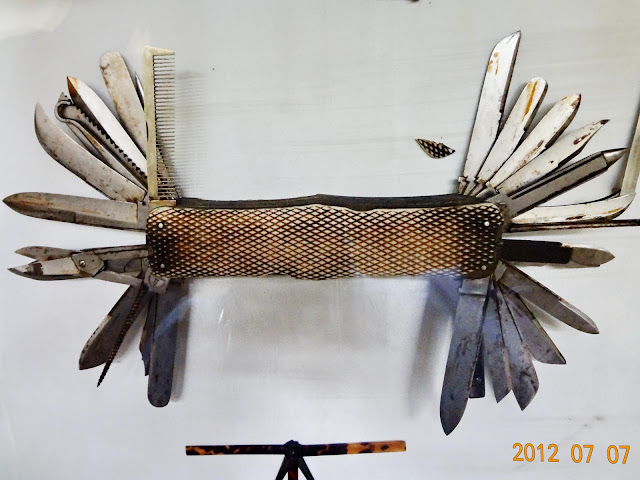 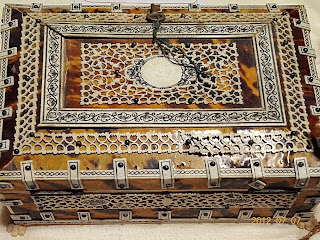 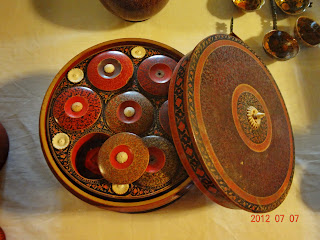 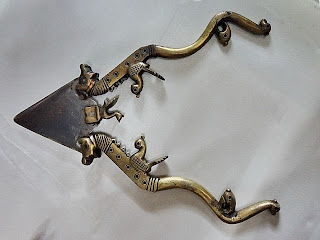 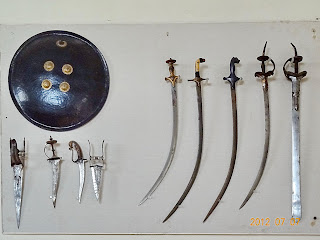 
The sixth Nizam is believed to have lived here and the building was named after his mother Roshan Begum.


The present Nizam (Barkat Ali Khan Mukarram Jah, Pretender) and his family decided to restore the Chowmahalla Palace and open it to the public in January 2005. It took over 5 years to document and restore the palaces of the first courtyard to its former glory. 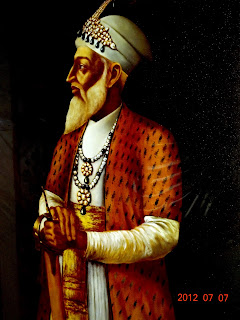 Nizam-ul-Mulk of Hyderabad popularly known as Nizam of Hyderabad, was a former monarchy of the Hydereabad Stage. Nizam, a shortened from Nizam-ul-Mulk, meaning Administrator of the Realm, was the title of the native soveriengs, since 1724, belonging to the Asaf Jahi dynasty. The dynasty was founded by Mir Qamar-ud-Din Siddiqi, a viceroy of the Deccan under the Mughal emperors from 1713 to 1721 and he intermittently ruled under the title Asaf Jah in 1724, and after Aurangzeb's death in 1707, the Mughal Empire crumbled and the viceroy in Hyderabad, the young Asaf Jah, declared himself independent. From 1798 Hyderabad was one of the princely states of British India, but it retained control of its internal affairs.
Seven Nizams ruled Hyderabad for two centuries until Indian Independence in 1947. The Asaf Jahi rulers were great patrons of literature, art, architecture, culture, jewellary collection and rich food. The Nizams ruled until 17 September 1948 when Indian military attacked the independent enclave sovereign state forcing the Nizam's surrender to Indian forces in what became known as a 'Police Action' after the Indian Army's 'Operation Polo'. 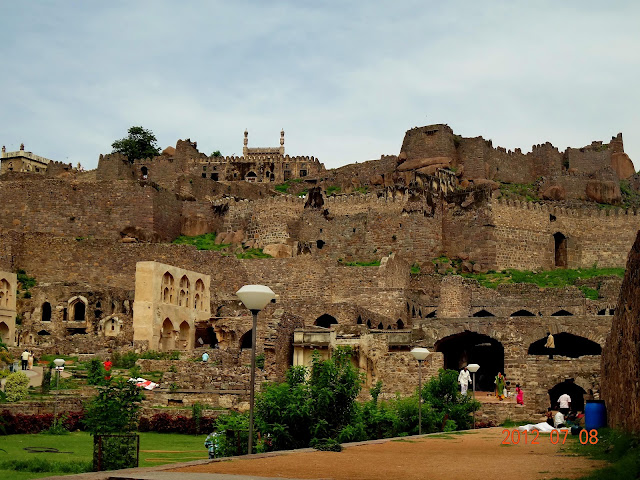 Golkonda or Golla konda (shepherd's hill) a ruined city of south-central India and capital of ancient Kingdom of Golkonda (c.1518–1687), is situated 11 km west of Hydereabad.

The most important builder of Golkonda was Ibrahim Quli Qutib Shah Wali, the fourth Qutub king of the Qutub Shahi Dynasty. Ibrahim was following in the spirit of his ancestors, the Qutub Shahi kings, a great family of builders who had ruled the kingdom of Golkonda from 1512. Their first capital, the fortress citadel of Golkonda, was rebuilt for defense from invading Mughals from the north. They laid out Golkonda's splendid monuments, now in ruins, and designed a perfect acousticalsystem by which a hand clap sounded at the fort's main gates, the grand portico, was heard at the top of the citadel, situated on a 300-foot (91 m)-high granite hill. This is one of the fascinating features of the fort.
They ruled over most of present day Andhra Pradesh before the British Raj. After transferring Northern Circars to British, they ruled the Telangana region and some parts of present day Karnataka and Maharastra.

The 13th century Golkonda Fort was built by the Kakatiya kings of Warangal.The Kakatiya’s ascent to power can be traced to the reign of the Western Chalukyas. Kakartya Gundyana, a subordinate of the Eastern Chalukyan monarch, Amma II (945 CE-970 CE), established the Kakatiya dynasty. 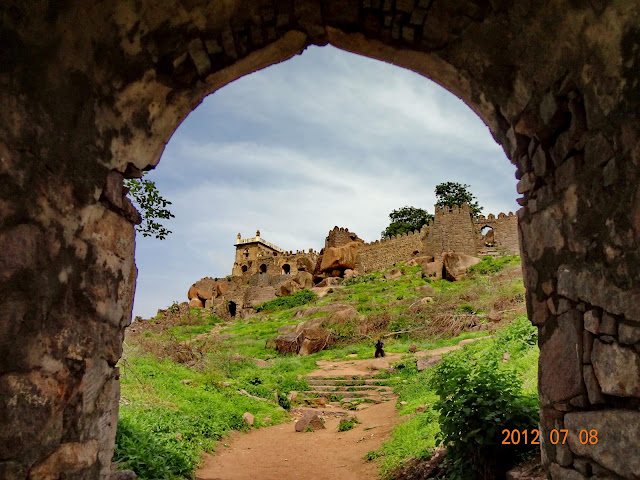 In the 16th century, Golkonda was the capital and fortress city of the Qutb Shahi kingdom, near Hyderabad. The city was home to one of the most powerful Muslim sultanates in the region and was the center of a flourishing diamond trade.

The city and fortress are built on a Granite hill that is 120 meters (400 ft) high and is surrounded by massive crenelated ramparts. The beginnings of the fort date to 1143, when the Hindu Kakatiya dynasty ruled the area. The Kakatiya dynasty were followed by the state ofWarangal, which was later conquered by the Islamic Bahamani Sultanat. The fort became the capital of a major province in the Sultanate and after its collapse the capital of the Qutb Shahi Kings. The fort finally fell into ruins after a siege and its fall toMughal emperor Aurangazeb. 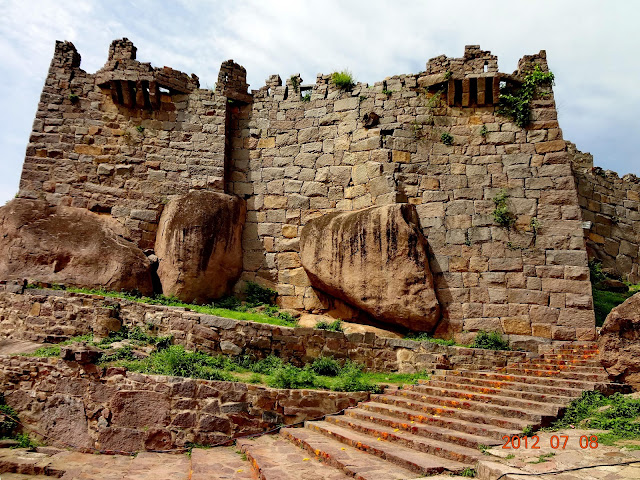 After the collapse of the Bahamani Sultanat, Golkonda rose to prominence as the seat of the Qutb Shahi dynasty around 1507. Over a period of 62 years the mud fort was expanded by the first three Qutb Shahi kings into a massive fort of granite, extending around 5 km in circumference. It remained the capital of the Qutb Shahi dynasty until 1590 when the capital was shifted to Hyderabad. The Qutb Shahis expanded the fort, whose 7 km outer wall enclosed the city. The state became a focal point for Shia Islam in India, for instance in the 17th century Bahraini clerics, Sheikh Ja`far bin Kamal al-Din and Sheikh Salih Al-Karzakani both emigrated to Golkonda.

The Qutb Shahi sultanate lasted until its conquest by Mughal emperor Aurangzeb in 1687. The fortress held out against Aurangzeb for nine months, falling to the Mughals through treachery. 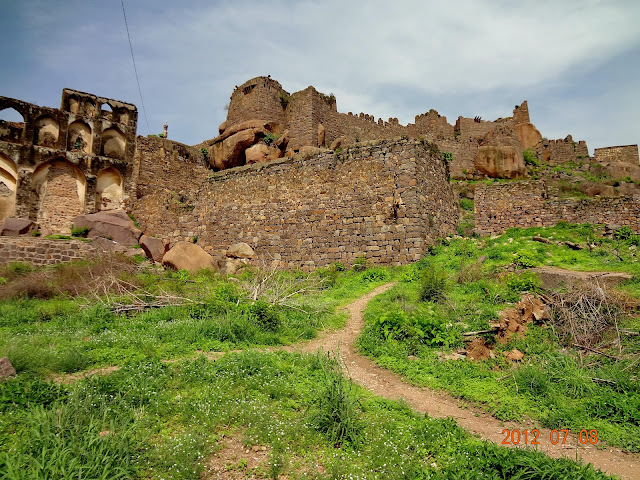 Kancharla Gopanna, popularly known as Bhaktha Ramadaasu, a devout Hindu who constructed Bhadrachalm temple without informing the sultan at that time Tana Shah, was kept in a jail located inside the fort.

The Golconda fort used to have a vault where once the famous Kohinoor and Hope diamonds were stored along with other diamonds. Golkonda's mines yielded few diamonds. Actually, Golkonda was the market city of the diamond trade, and gems sold there came from a number of mines. 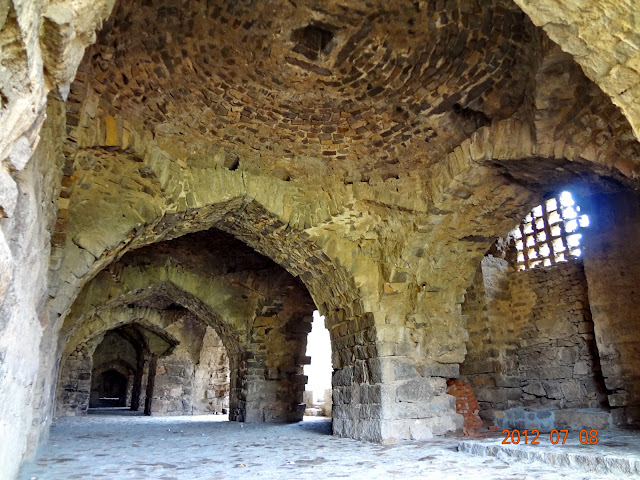 The fortress city within the walls was famous for diamond trade. However, Europeans believed that diamonds were found only in the fabled Golconda mines. Many famed diamonds are believed to have been excavated from the mines of Golkonda, such as:

Golkonda consists of four distinct forts with a 10 km long outer wall with 87 semicircular bastions (some still mounted with cannons), eight gateways, and four drawbridges, with a number of royal apartments & halls, temples, mosques, magazines, stables, etc. inside. The lowest of these is the outermost enclosure into which we enter by the "Fateh Darwaza" (Victory gate, so called after Airangzeb's triumphant army marched in through this gate) studded with giant iron spikes (to prevent elephants from battering them down) near the south-eastern corner. At Fateh Darwaza can be experienced a fantastic acoustic effect, characteristic of the engineering marvels at Golkonda. A hand clap at a certain point below the dome at the entrance reverberates and can be heard clearly at the 'Bala Hisar' pavillion, the highest point almost a kilometre away. This worked as a warning note to the royals in case of an attack. 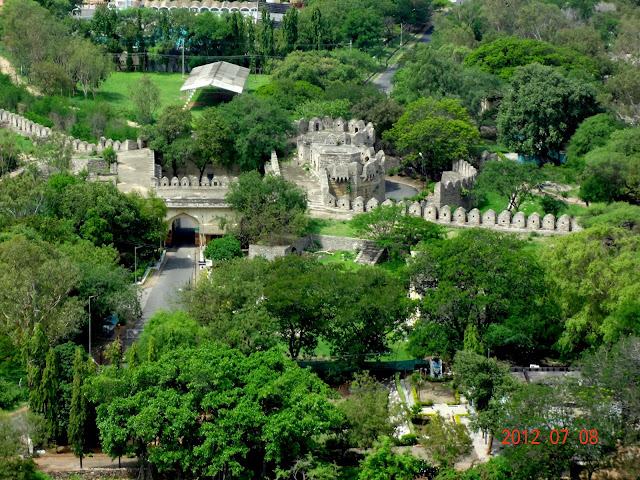 The whole of the Golkonda Fort complex and its surrounding spreads across 11 km of total area.

The fort of Golkonda is known for its magical acoustic system. The highest point of the fort is the "Bala Hissar", which is located a kilometer away. The palaces, factories, water supply system and the famous "Rahban" cannon, within the fort are some of the major attractions. 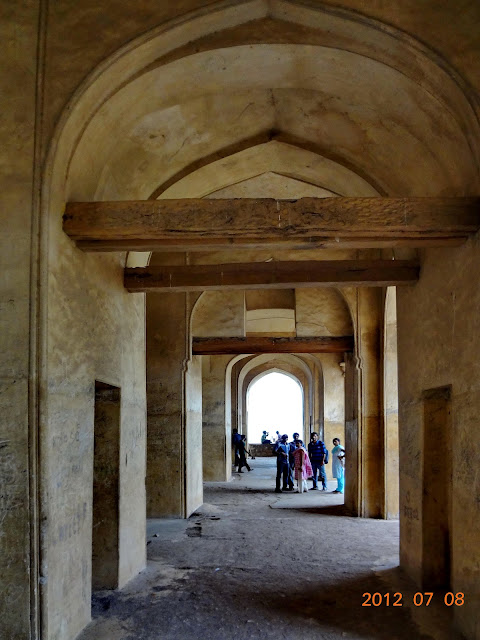 It is believed that there is a secret underground tunnel that leads from the "Durbar Hall" and ends in one of the palaces at the foot of the hill. The fort also contains the tombs of the Qutub Shahi kings. These tombs have Islamic architecture and are located about 1 km north of the outer wall of Golkonda.

The ventilation of the fort is absolutely fabulous having exotic designs. They were so intricately designed that cool breeze could reach the interiors of the fort, providing a respite from the heat of summer.

The Huge gates of the fort are decorated with large pointed iron spikes. These spikes prevented Elephants from damaging the fort. The fort of Golkonda is encircled by a 11-km-long outer wall. This was built in order to fortify the fort.

Highlight of the fort is a light-and-sound show. The timings of the show are different during summers and winters. During November–February, the shows begin at 6:30 pm, and during March-October, the shows begin at 7 pm. On Wednesdays and Sundays the shows are presented in English; on Tuesdays, Fridays, and on Saturdays, in Hindi; and on Thursdays, Telugu. 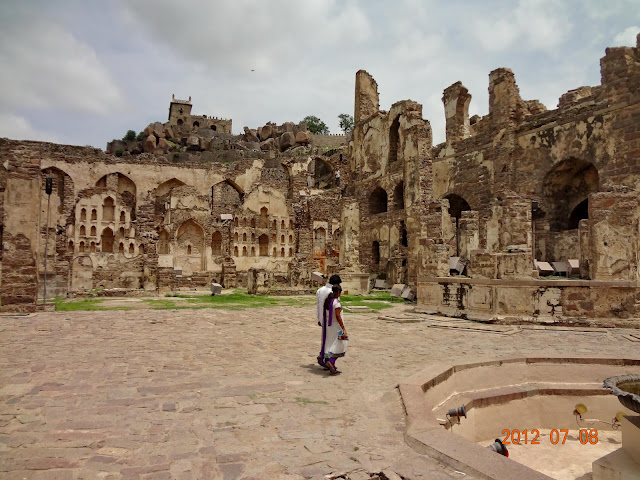 You can enjoy Golconda Fort with the sound and light, the show that brings the legend of Golconda to life. People gather to see and hear this show in the evening. The show has voice-over of Bollywood living legend Amitabh Bacchan. The show starts with a spectacular interplay of audio and visual effects. The show can be watched in English, Hindi and Telugu.