Every Year in the month of July i.e., on Second Saturday Day we the group (VRUKSHAMITRA) identify Govt Schools/Pvt Aided Schools and Plant the trees and inform about Preservation of Nature and Wildlife to the School Students, this year on 2017 we decided to have at SRI KOTTURESHWARA VIDYAVARDHAKA SANGHA at GANGAVATHI-150 saplings have been planted
[ full details at  VRUKSHAMITRA WEBSITE]

After completing the programme of VANAMAHOTSAVA at SRI KOTTURESHWARA VIDYAVARDHAKA SANGHA,GANGAVATHI Myself and Sateesh  moved towards  Darjoi Bear Sanctuary bt 2-30 pm  with the persmission of RFO we had waiting near hide from 2-30 to 6-00 no movement of any sightings only a few like mongoose, peacock, and monkeys, finally decided to pack off, suddenly far behind i noticed Bear with Cubs moving towards the spot, and we are very lucky that on one visit we found bear with cubs [ as mentioned by locals there, there was no sighting for last few weeks] and took some snaps over there

Daroji Sloth Bear Sanctuary is located in Ballari district in Karnataka. It is spread over 82.72 km2 (31.94 sq mi). The sanctuary was created exclusively for the preservation of the sloth bear. It is about 50 km from Ballari and about 15 km from the World Heritage Site Hampi. The area between Daroji in Sandur taluka and Ramasagar of Hospet Taluk is host to numerous sloth bears.

The sanctuary is open between 6 A.M. and 6 P.M. on all days. There is a watchtower within the sanctuary, opposite Karadikallu Gudda, that provides a vantage point to view the bears descending from the adjacent hillocks during evening hours. 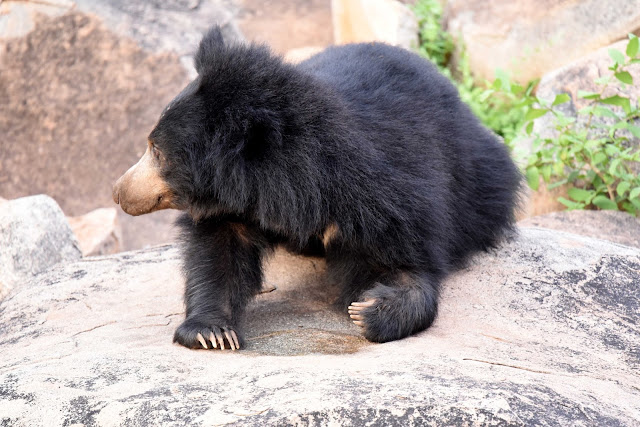 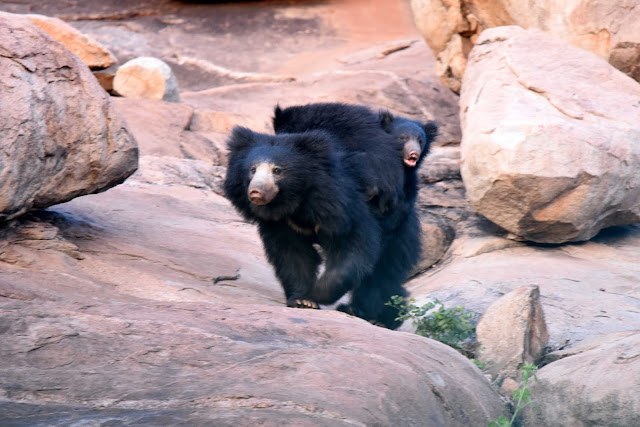 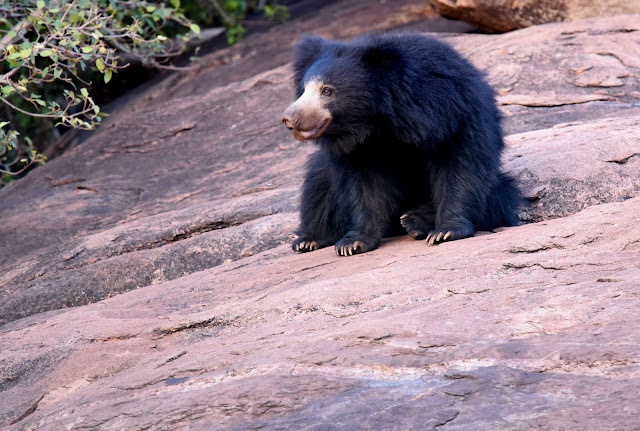 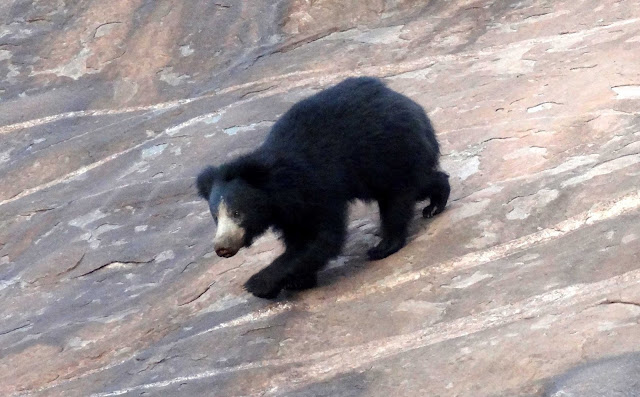 Flora & Fauna
The flora of this sanctuary is primarily dry deciduous scrub and Southern thorn forests. At the time of declaration of the sanctuary, it was a large area of barren hillocks, but persistent efforts from Karnataka Forest Department have transformed the area into lush green forest, filled with local flora.

The sanctuary's flagship species is the Indian sloth bear (Melursus ursinus). It has a very stable population of sloth bears and they reside in the numerous caves found in the hillocks within the sanctuary. Tigers, leopards, chitals, monitor lizards, mongoose, pangolins, star tortoises etc. are some of the other animals that abound in the sanctuary.

The painted spurfowl (Galloperdix lunulata) is a bird of the pheasant family found in rocky hill and scrub forests mainly in peninsular India. Males are more brightly coloured and spotted boldly in white. Males have two to four spurs while females can have one or two of the spurs on their tarsus. The species is found mainly in rocky and scrub forest habitats unlike the red spurfowl. They are found in the undergrowth in pairs or small groups, escaping by running and rarely taking to the wing when flushed.


The white-rumped munia or white-rumped mannikin (Lonchura striata), sometimes called striated finch in aviculture, is a small passerine bird from the family of waxbill "finches" (Estrildidae). These are close relatives of the true finches (Fringillidae) and true sparrows (Passeridae).

It is native to tropical continental Asia and some adjacent islands, and has been naturalized in some parts of Japan. Its domesticated hybrid descendant, the society finch or Bengalese finch, is found worldwide as a pet and a biological model organism.

The black-throated munia or Jerdon's mannikin (Lonchura kelaarti) is a small passerine bird. This estrildid finch is a resident breeding bird in the hills of southwest India, the Eastern Ghats and Sri Lanka. 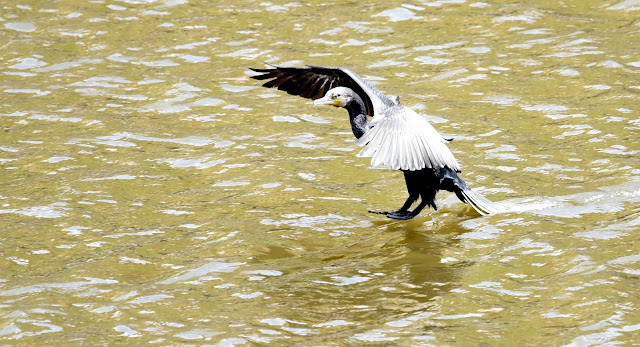 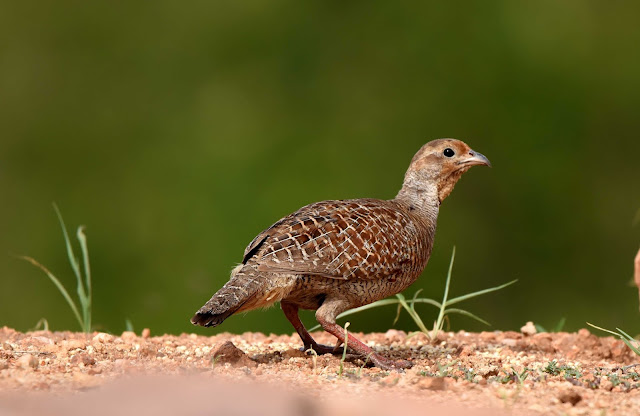 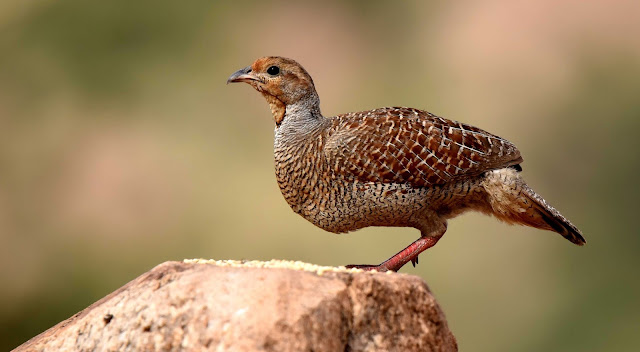 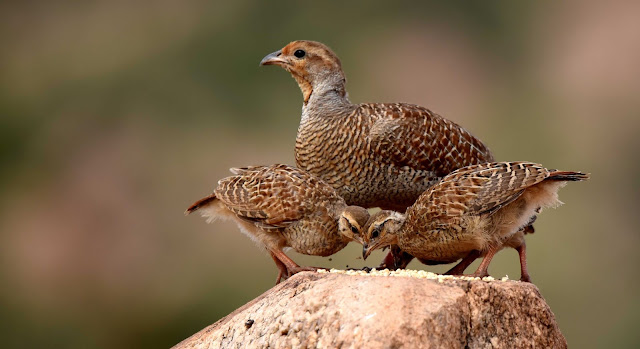 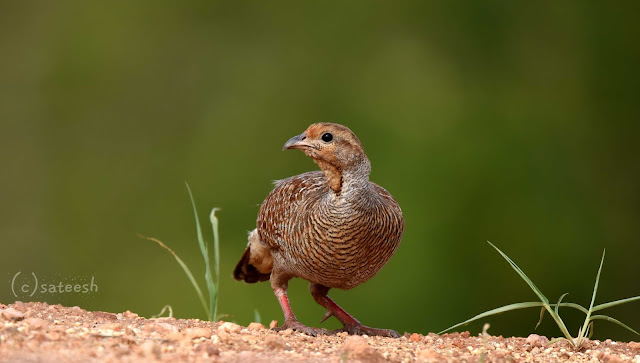 The painted sandgrouse (Pterocles indicus) is a medium large bird in the sandgrouse family found in Bangladesh, India and Pakistan. 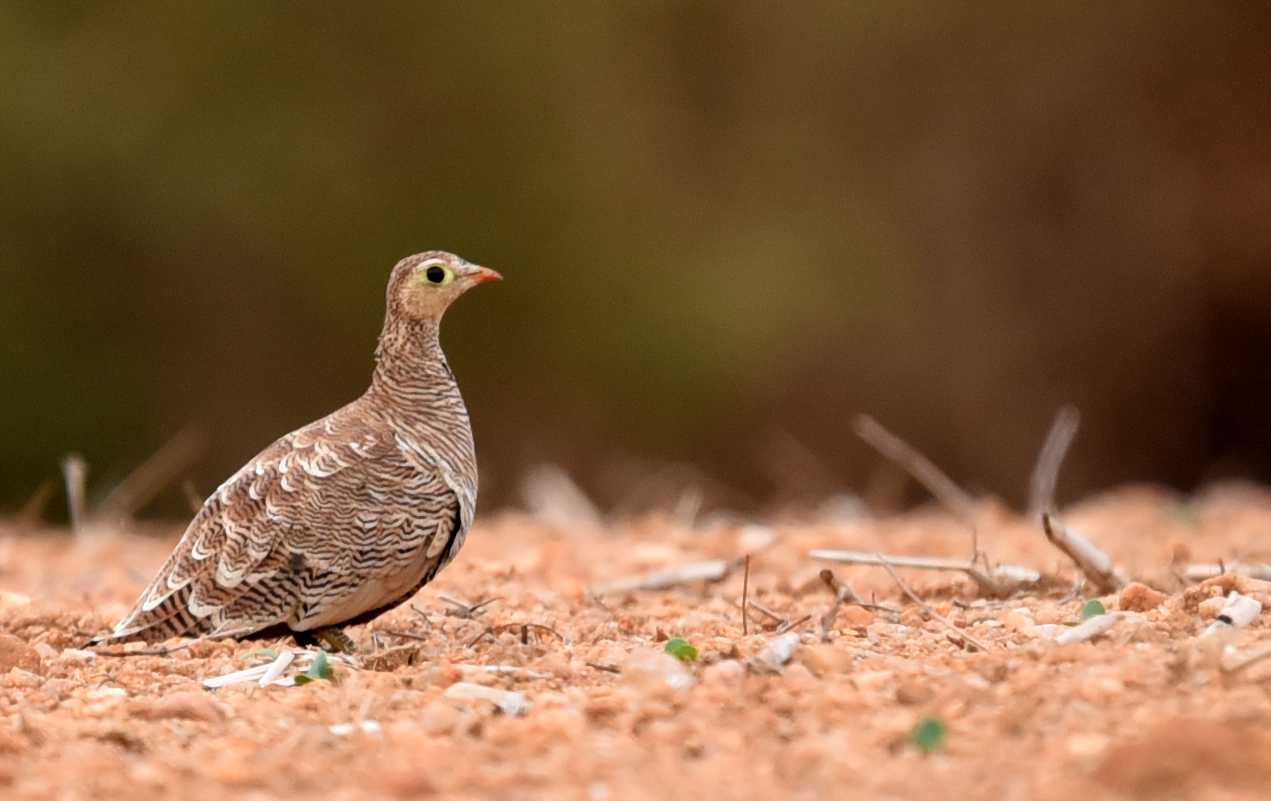 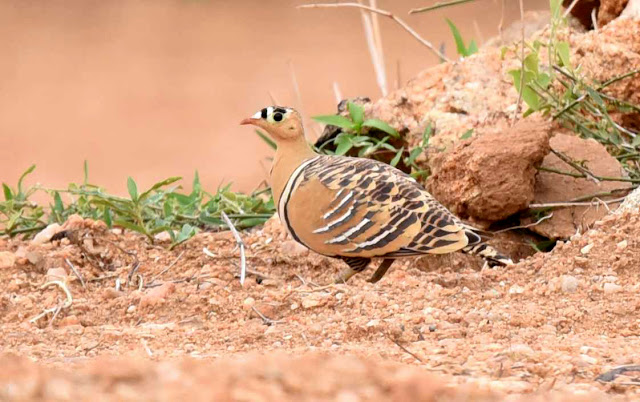 The painted sandgrouse is a plump ground-dwelling bird with a small head and short legs. The sexes are differently coloured. In the male, the bill is orange and there is a black bar across the white forehead, fine black longitudinal lines on the nape and a white patch of bare skin surrounding the eye. There is a broad black and white band around the chest. The breast and belly are a uniform pinkish-brown colour and the back, wings and tail are brown, boldly marked in black and white transverse bars. The female is duller in appearance being a greyish brown colour, barred and speckled with darker brown and white. 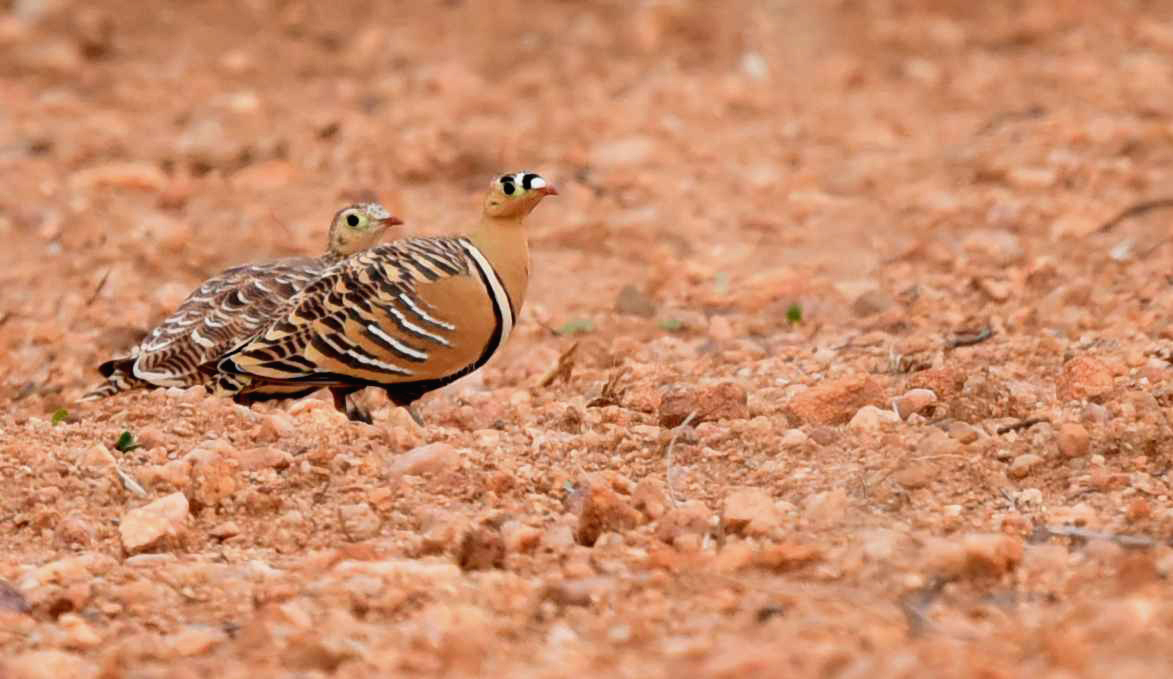 The painted sandgrouse is found in dry regions in rough grassland, rocky areas and scrub and feeds mainly on seeds. It is gregarious and groups congregate at waterholes to drink. 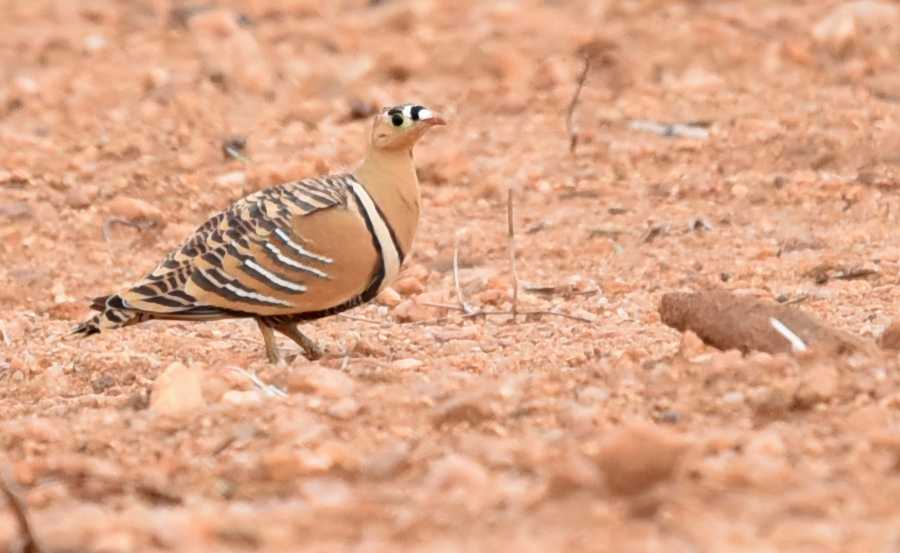 The spotted owl (Strix occidentalis) is a species of true owl. It is a resident species of old-growth forests in western North America, where it nests in tree holes, old bird of prey nests, or rock crevices. Nests can be between 12 and 60 metres (39 and 197 ft) high and usually contain two eggs (though some contain as many as four). It is a nocturnal owl, which feeds on small mammals and birds. Three subspecies are recognized, ranging in distribution from British Columbia to Mexico. The spotted owl is under pressure from habitat destruction throughout its range, and is currently classified as a near-threatened species 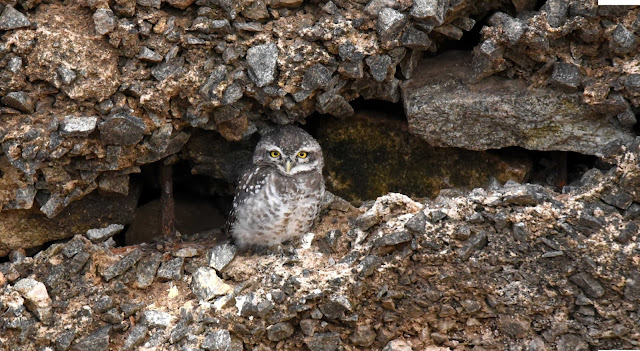 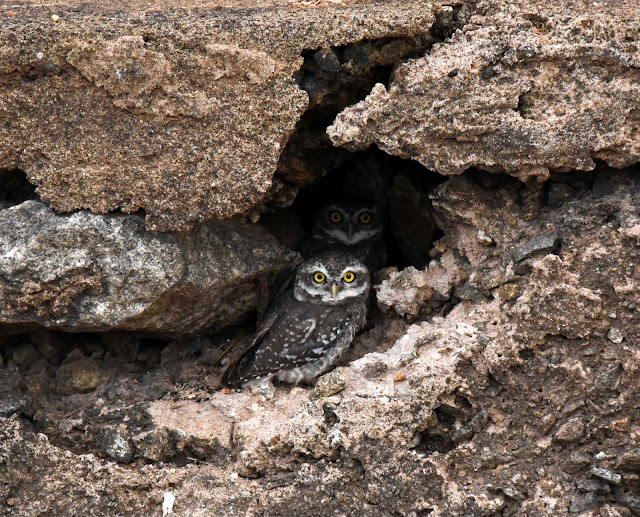 The Eurasian eagle-owl (Bubo bubo) is a species of eagle-owl that resides in much of Eurasia. It is also called the European eagle-owl and in Europe, where it is the only member of its genus besides the snowy owl (B. scandiacus), it is occasionally abbreviated to just eagle-owl It is one of the largest species of owl, and females can grow to a total length of 75 cm (30 in), with a wingspan of 188 cm (6 ft 2 in), males being slightly smaller. This bird has distinctive ear tufts, with upper parts that are mottled with darker blackish colouring and tawny. The wings and tail are barred. The underparts are a variably hued buff, streaked with darker colour. The facial disc is poorly developed and the orange eyes are distinctive.

Besides being one of the largest living species of owl, it is also one of the most widely distributed. The Eurasian eagle-owl is found in many habitats but is mostly a bird of mountain regions, coniferous forests, steppes and other relatively remote places. It is a mostly nocturnal predator, hunting for a range of different prey species, predominantly small mammals but also birds of varying sizes, reptiles, amphibians, fish, large insects and other assorted invertebrates. It typically breeds on cliff ledges, in gullies, among rocks or in other concealed locations. The nest is a scrape in which averages of two eggs are laid at intervals. These hatch at different times. The female incubates the eggs and broods the young, and the male provides food for her and when they hatch, for the nestlings as well. Continuing parental care for the young is provided by both adults for about five months. There are at least a dozen subspecies of Eurasian eagle-owl.

With a total range in Europe and Asia of about 32 million square kilometres (12 million square miles) and a total population estimated to be between 250 thousand and 2.5 million, the IUCN lists the bird's conservation status as being of "least concern". The vast majority of eagle-owls live in mainland Europe, Russia and Central Asia, and an estimated number of between 12 and 40 pairs are thought to reside in the United Kingdom as of 2016, a number which may be on the rise. 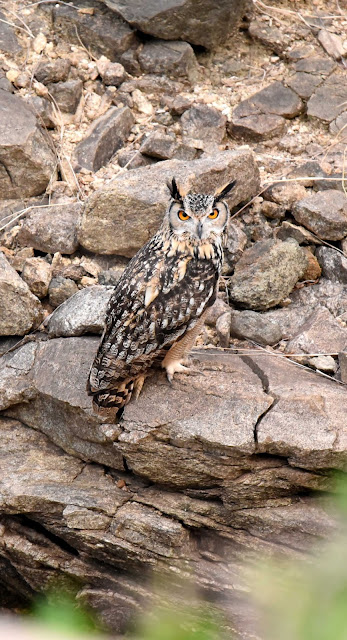