When my friend Mr Sateesh contacted me to visit Jayamangali Blackbuck Conservation Reserve since we had visited in 2011 nearly three years back, I contacted Mr. Harish and Mr. Viraj and we all left in Mr.Harish Bolero on 16th August 2014 by 5-00 am, had tea enroute by 7-30 am we had breakfast at Kodigengahalli, (Idli-Bajji and got Veg Palauv packed for afternoon) and reached the Forest by 8-30 am.

We are a group of Photography Enthusiasts, who are mainly into all types of photography especially Wildlife,Pictorial and Bird Photography .

I think the photographs will explain more about these fantastic sightings than the words. so, here we go...

Location
This area is located 23 km to the north east of Madhugiri town (Karnataka) and about 20 km to the west of Hindupur town (Andhra Pradesh). The geographical co-ordinates of the forest watch tower inside this area are 13 44’ 20” N and 7 19’ 41” E. 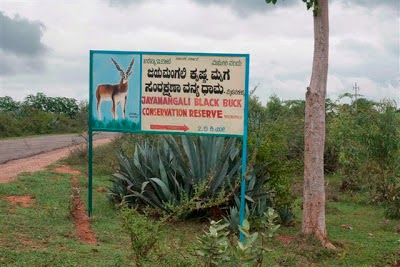 Jayamangali (formerly Maidenahalli) Blackbuck Conservation Reserve is Tumkur district's only notified protected area. It neighbours Maidenahalli, a small village in Madhugiri Taluk, at the north-eastern tip of Tumkur district of Karnataka state, India. This area is a part of the plains of Deccan plateau and borders Anantapur district of Andhra Pradesh. It is a 798-acre (3.23 km2) patch of grassland with Eucalyptus and Acacia auriculiformis. It has the largest contiguous population of Blackbuck (Antilope cervicapra) in Karnataka, apart from Ranibennur Blackbuck Sanctuary 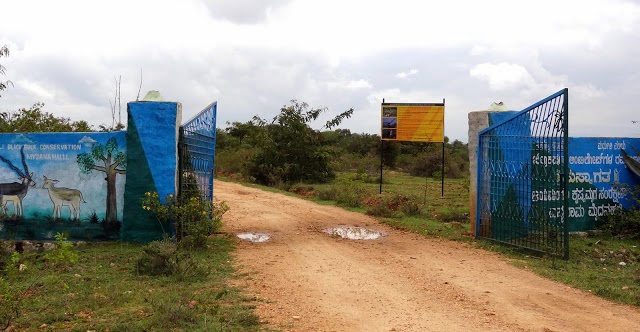 The open grasslands of peninsular India were once widespread across the Deccan Plateau. Post- independence, however, they have shrunk to isolated patches thanks to immense pressure for cultivation, human habitation and other reasons that also include industrialisation. In 1987, the forest department of Tumakuru Division began protecting the area when the blackbuck’s presence was brought to their notice. In 1992, after sustained efforts by the forest department, the jurisdiction of the area was handed over from the Revenue Department to the Forest department. The Forest Department then fenced a portion of the area and raised a nursery. A concrete watchtower was erected along with two wood houses and watchmen sheds. But, the ownership of the land still rested with the revenue department. 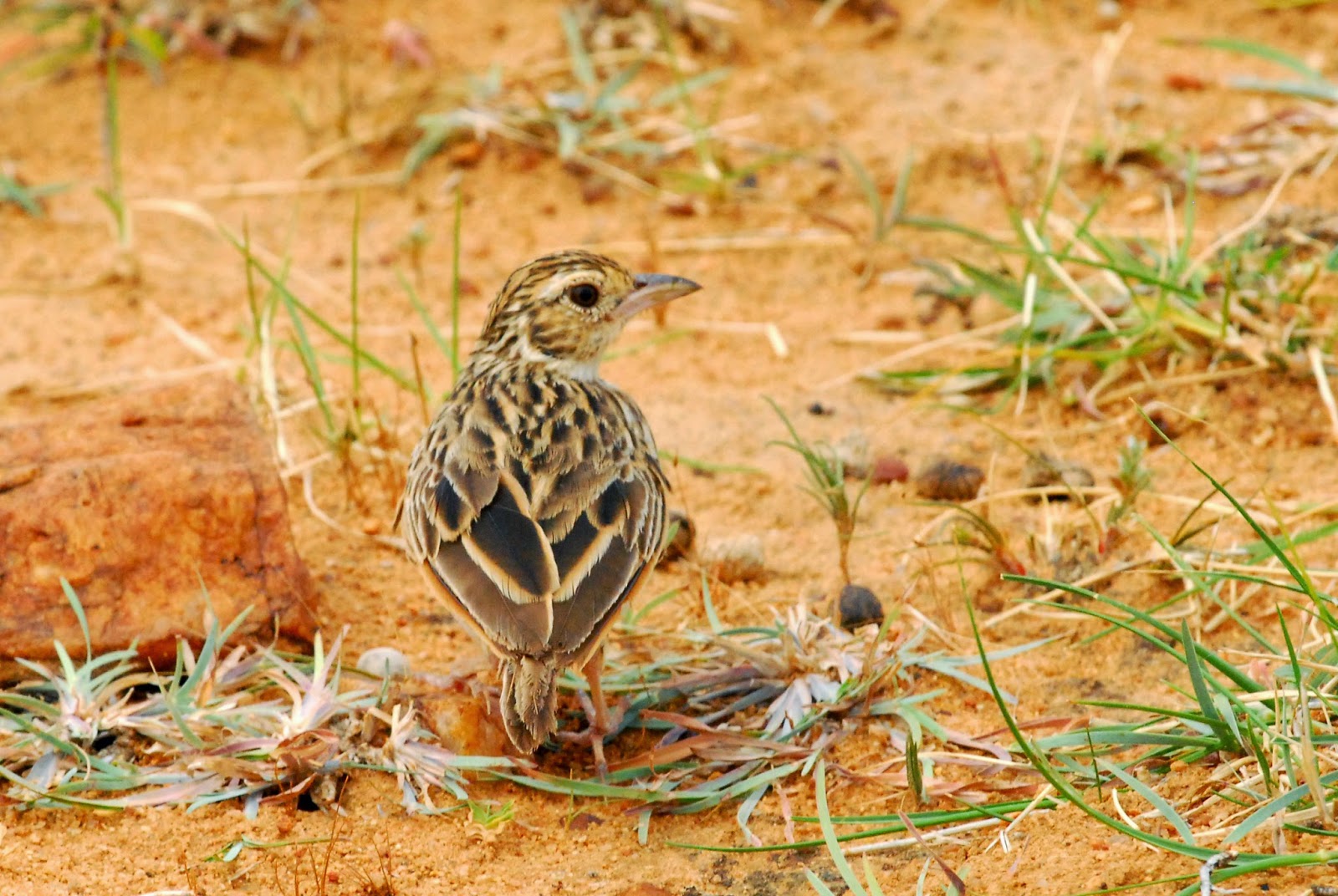 Tumakuru’s nature lovers worked hard to have the area granted the status of a Protected Area, like a wildlife sanctuary. The first ever Status Survey report on the area was published by Tumakuru-based Wildlife Aware Nature Club (WANC) in 1997. This helped the wildlife wing of Karnataka Forest Department to source data on this area and recommend it be declared a 'Conservation Reserve'. The Government of Karnataka accepted this proposal. In February 2007, vide Government Order No: FEE 342 FWL 05, 798.33 acres (3.2307 km2) of the area was finally notified as Jayamangali Blackbuck Conservation Reserve, (though the original area proposed to be included in this Conservation Reserve was 893 acres). Thus, Tumkur District's first protected area was born.

Blackbuck (Antilope cervicapra) is a species of antelope native to the Indian subcontinent. Their range decreased sharply during the 20th century. Since 2003, the IUCN lists the species as near threatened. 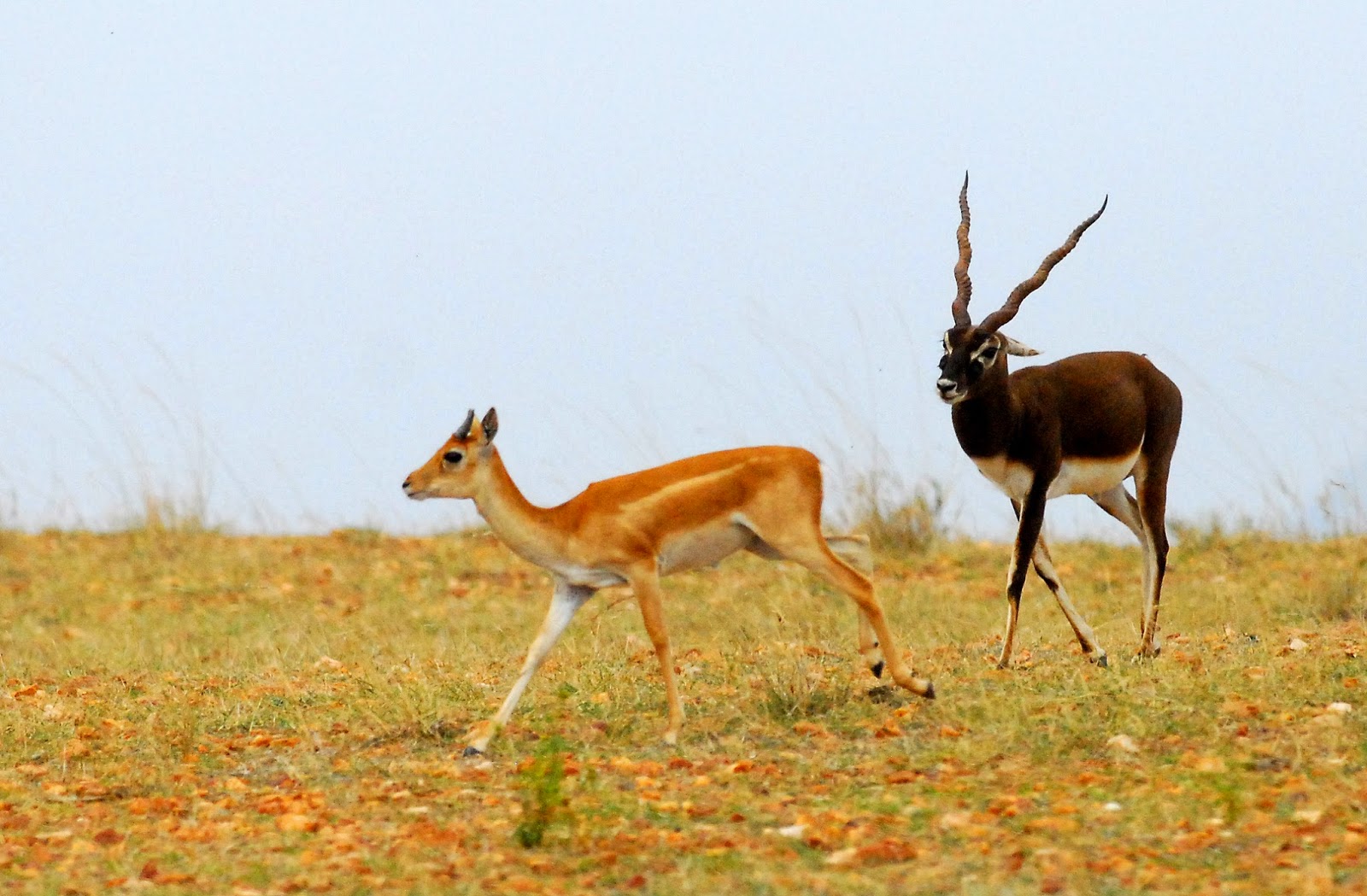 This species is the only living species of the genus Antilope, and has been introduced in Texas and Argentina. It is one of the fastest of all terrestrial animals reaching to speeds of up to 80 km/h and is one of the few antelopes where males and females have distinctive coloration, as the male bucks are a distinctive black and white and have long twisted horns, while females are fawn coloured with no horns. In its scientific name Antilope cervicapra, 'Antilope' from 'anthalops' (Greek) a horned animal; 'cervicapra' from 'cervus' (Latin) a deer and 'capra' (Latin) a she-goat. 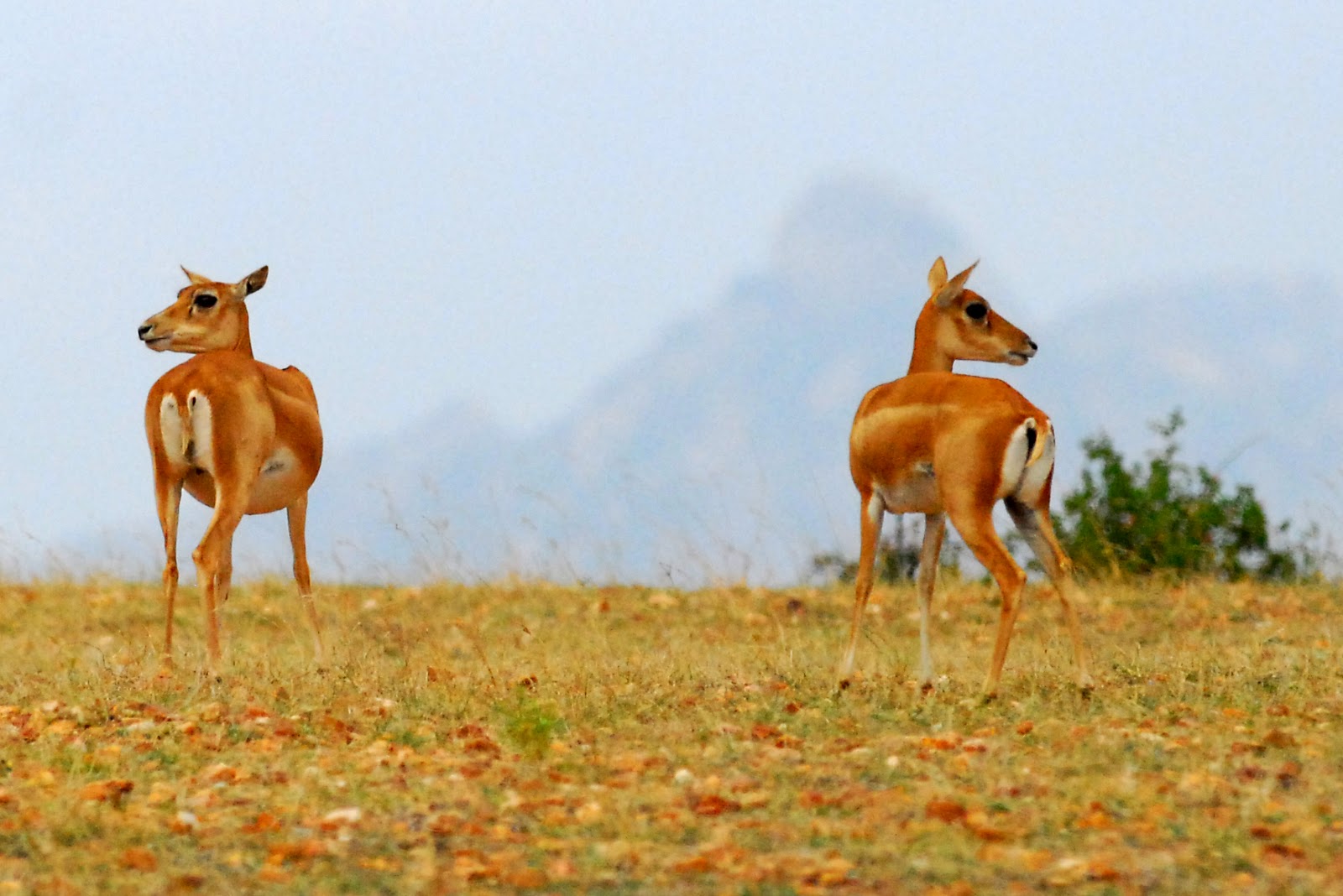 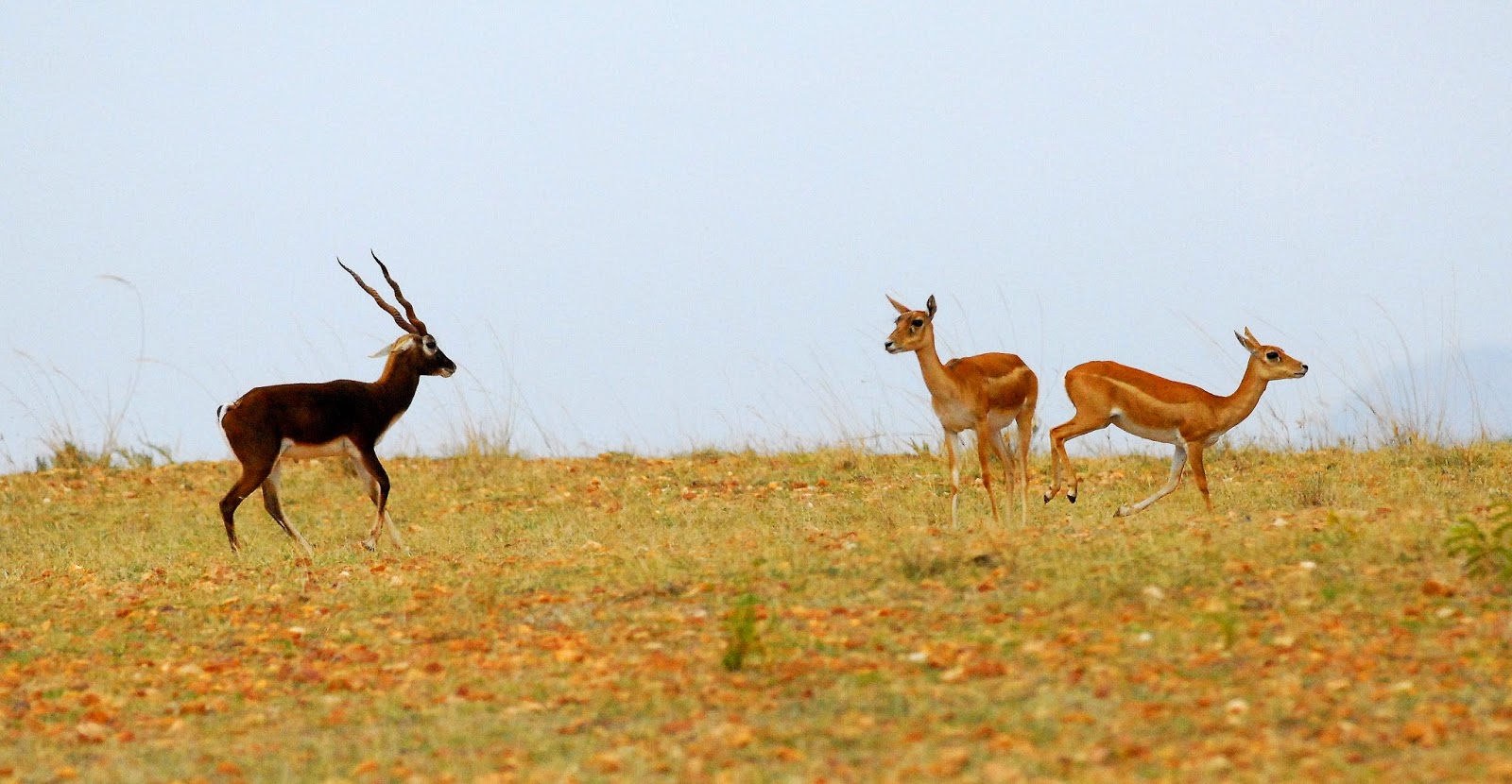 The blackbuck, is the provincial animal of India it is known as Krishna Mriga in Kannada. Also known as Krishna Jinka in Telugu, it has been declared as the state animal of Andhra Pradesh. Other local names for the species include Krishnasar in Bengali, Kala Hiran, Sasin, Iralai Maan, and Kalveet in Marathi.[4] It is often simply called Indian antelope though this term might also be used for other Antilopinae from the region.

The skin of Krishna Mrigam plays an important role in Hinduism, and Brahmin boys are traditionally required to wear a strip of unleathered hide after performing Upanayanam. 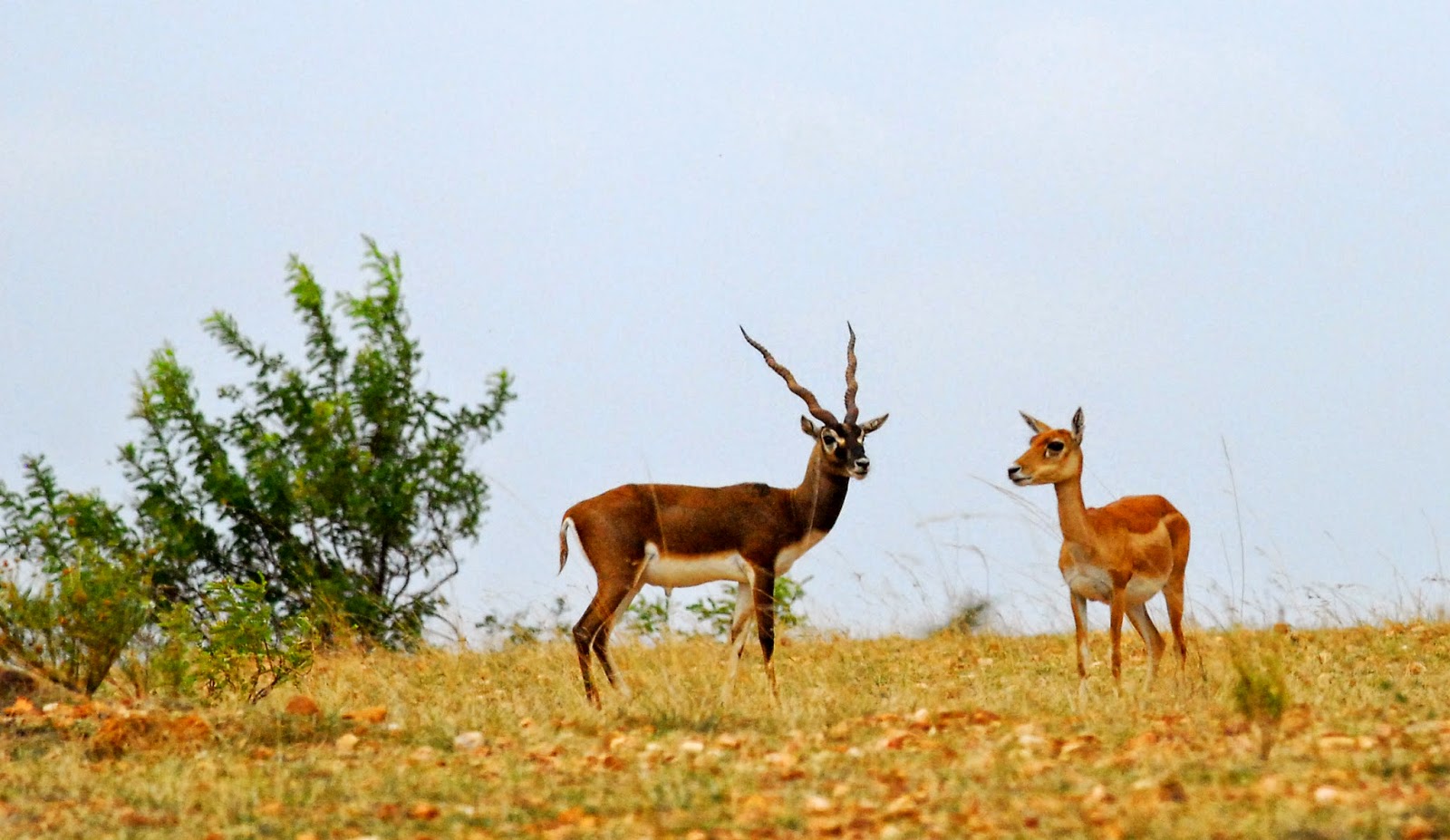 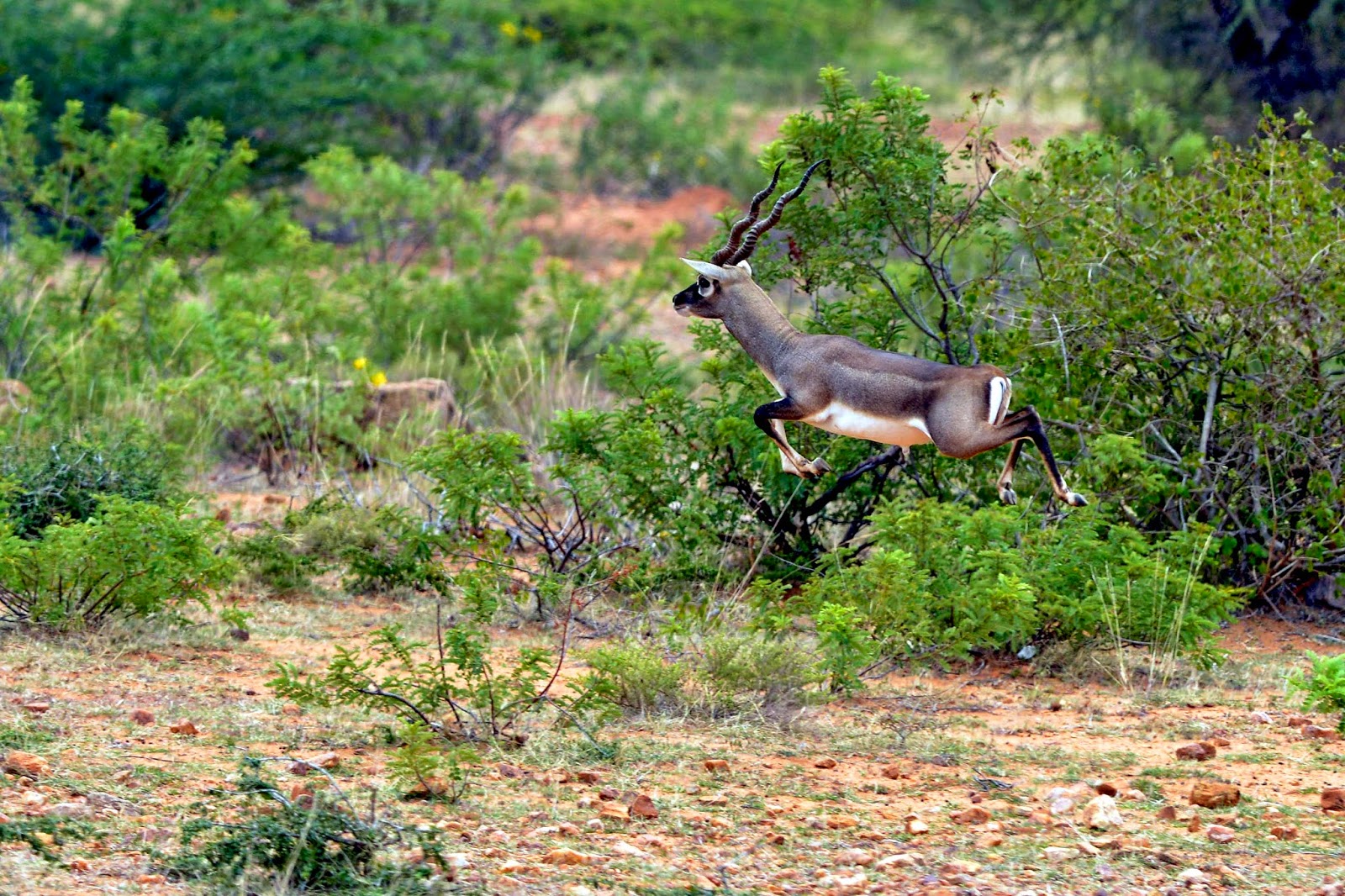 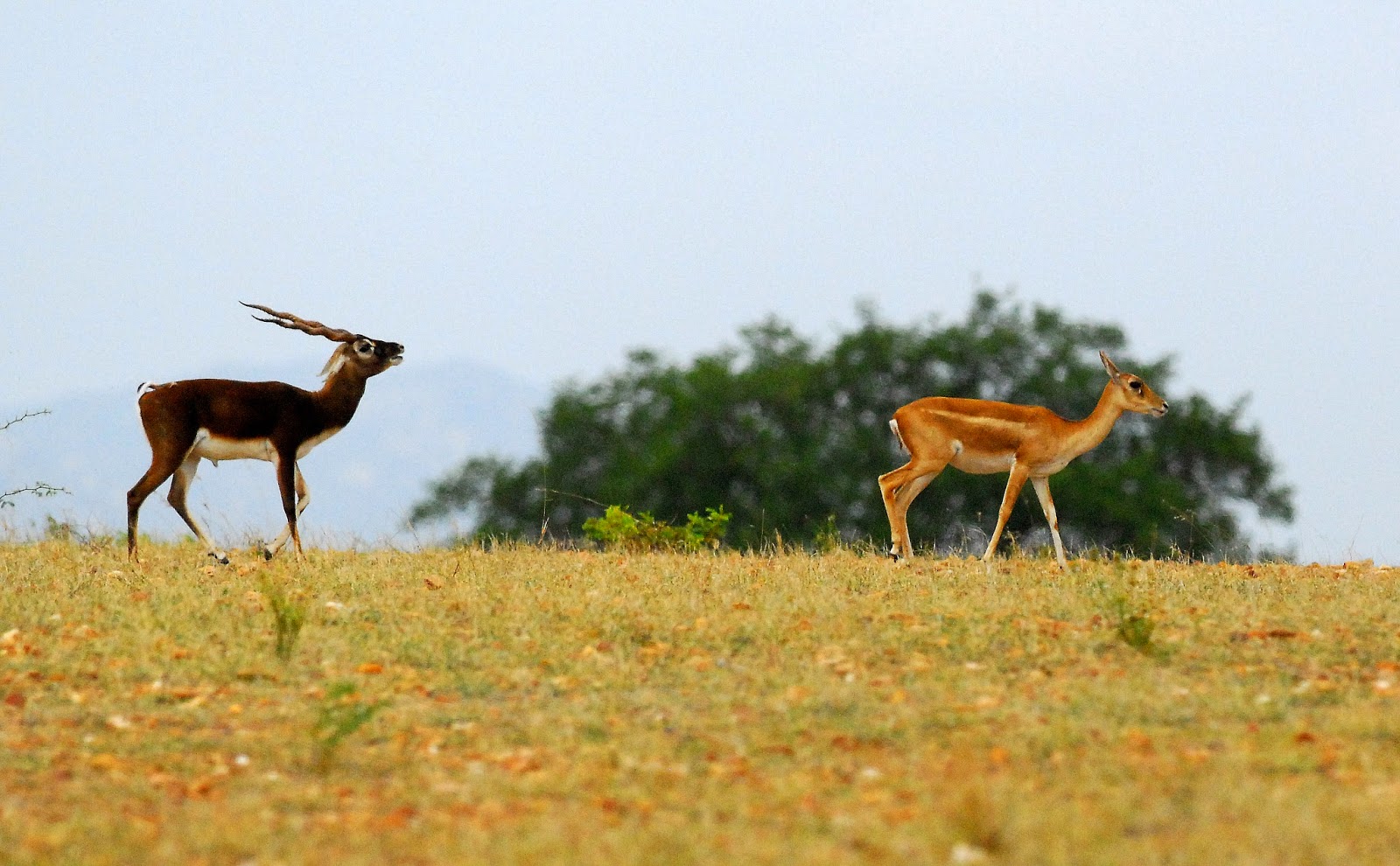 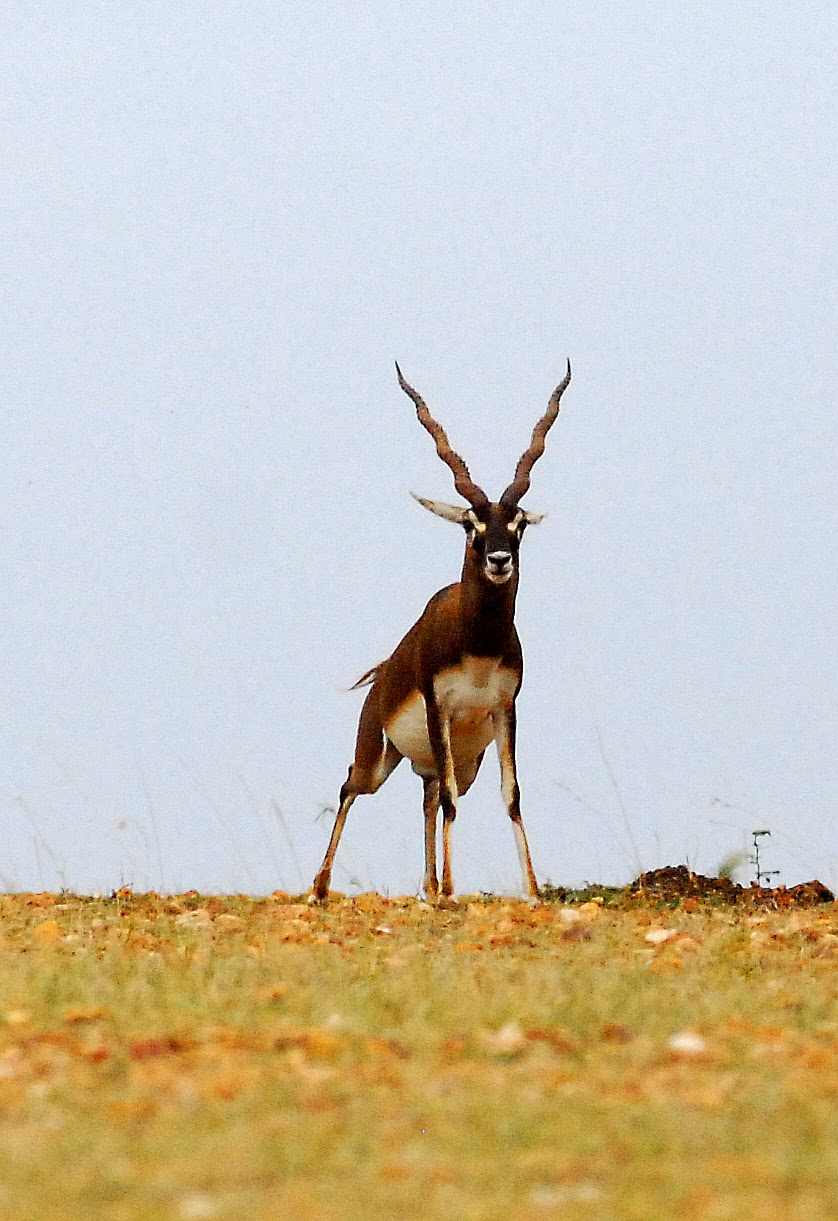 The distinctive horns of the Blackbuck are ringed with 1 to 4 spiral turns, rarely more than 4 turns, and can be as long as 79 cm (31 in). A trophy Blackbuck is greater than 46 cm (18 in). In the male, the upper body is black (dark brown), and the belly and eye rings are white. The light-brown female is usually hornless. Blackbuck usually roam the plains in herds of 15 to 20 animals with one dominant male.

On the open plain, the Blackbuck is one of the fastest animals and can outrun most predators over long distances. Its chief predator was the now extinct Indian Cheetah. It is now sometimes preyed upon by wolves, feral dogs, etc. 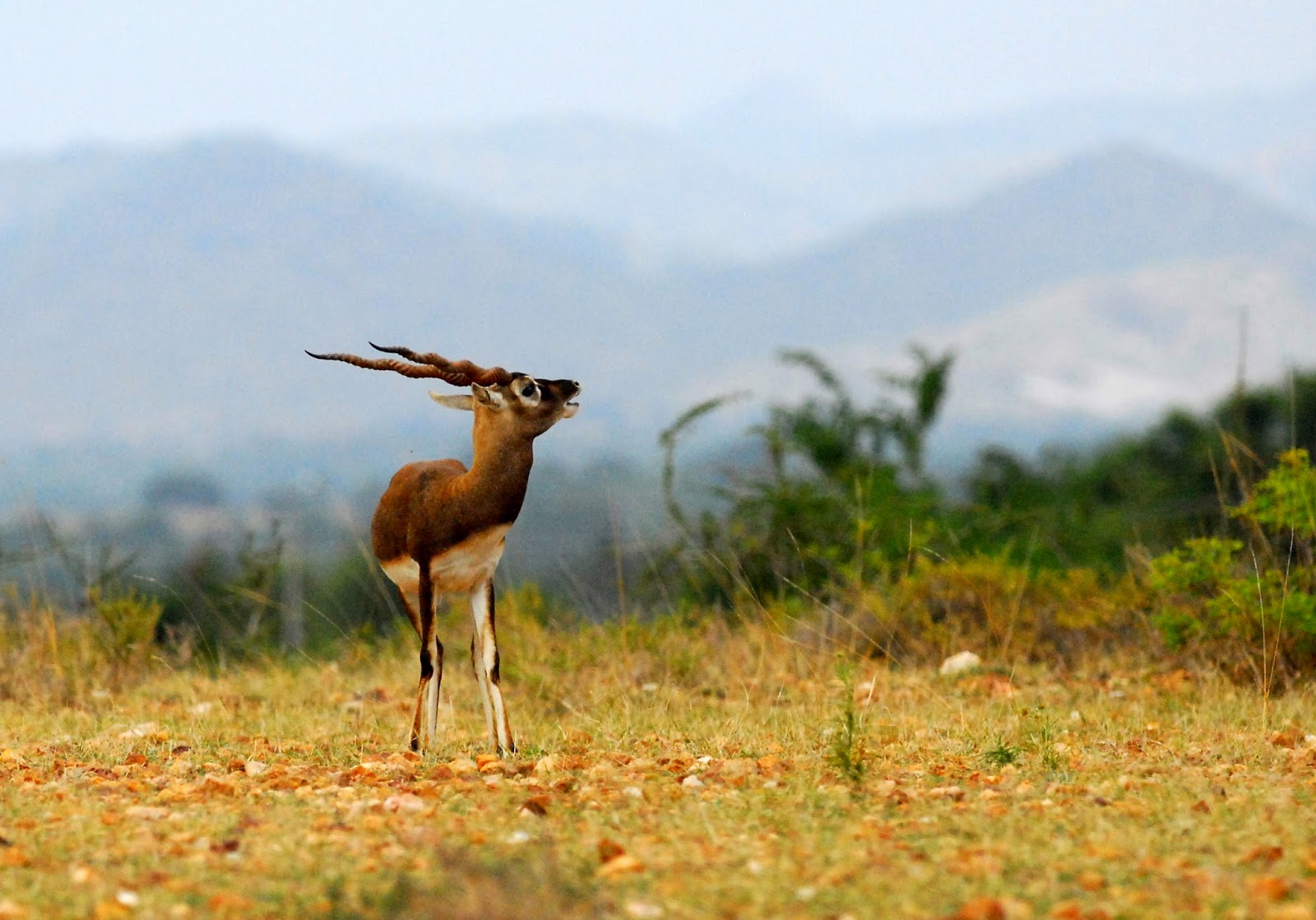 The diet of the Blackbuck consists mostly of grasses, although it will eat pods, flowers and fruits to supplement its diet. The maximum life span recorded is 16 years and the average is 12 years. 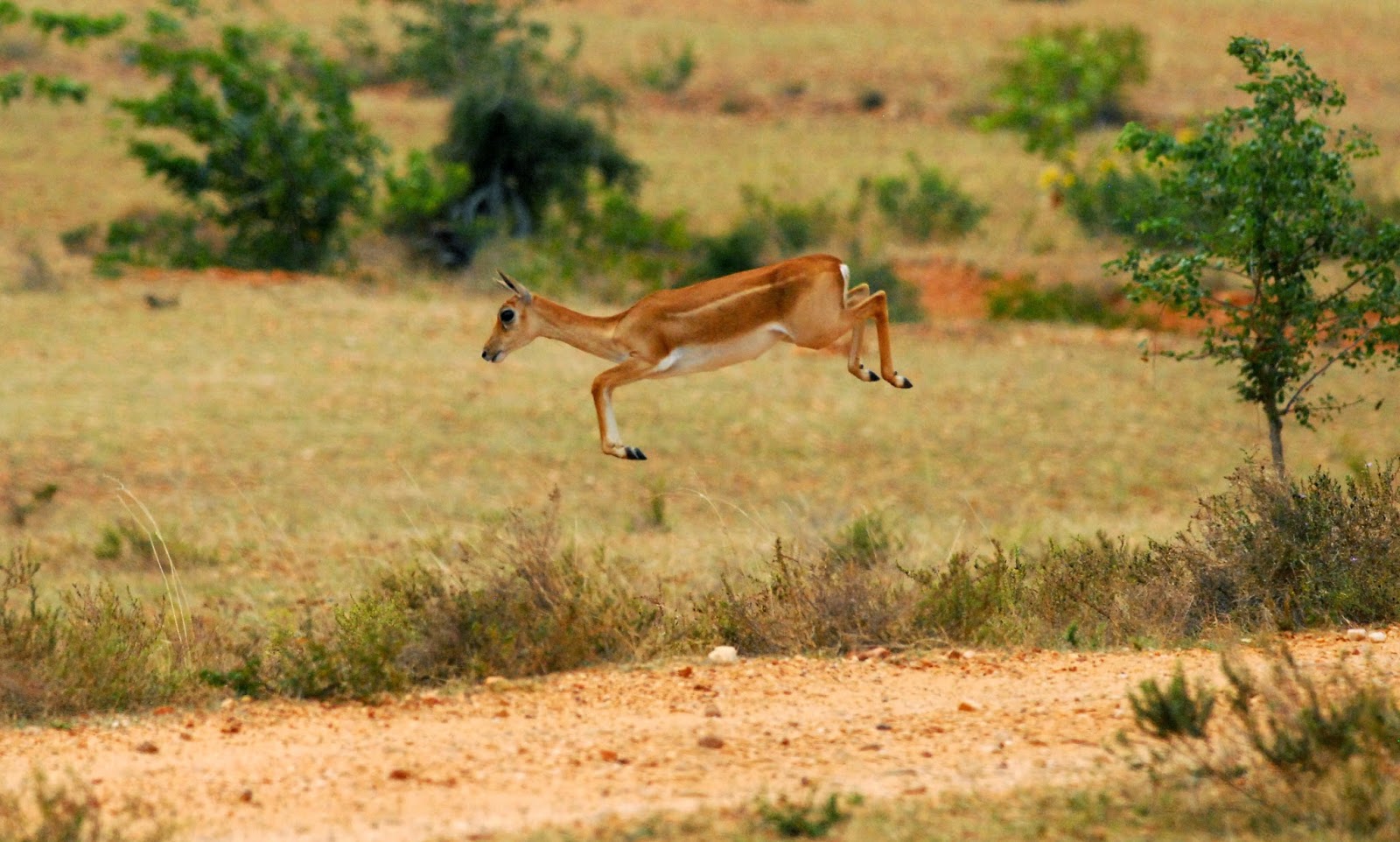 Albinism in Blackbuck is rare and caused by the lack of the pigment melanin. The animal looks fully white due to the lack of melanin in their skin. Wildlife experts say that the biggest problem with these Albinos is that they are singled out by predators and hunted. In Nepal, the last surviving population of blackbuck is found in the Blackbuck Conservation Area south of the Bardia National Park. In 2008, the population was estimated to comprise 184 individuals. 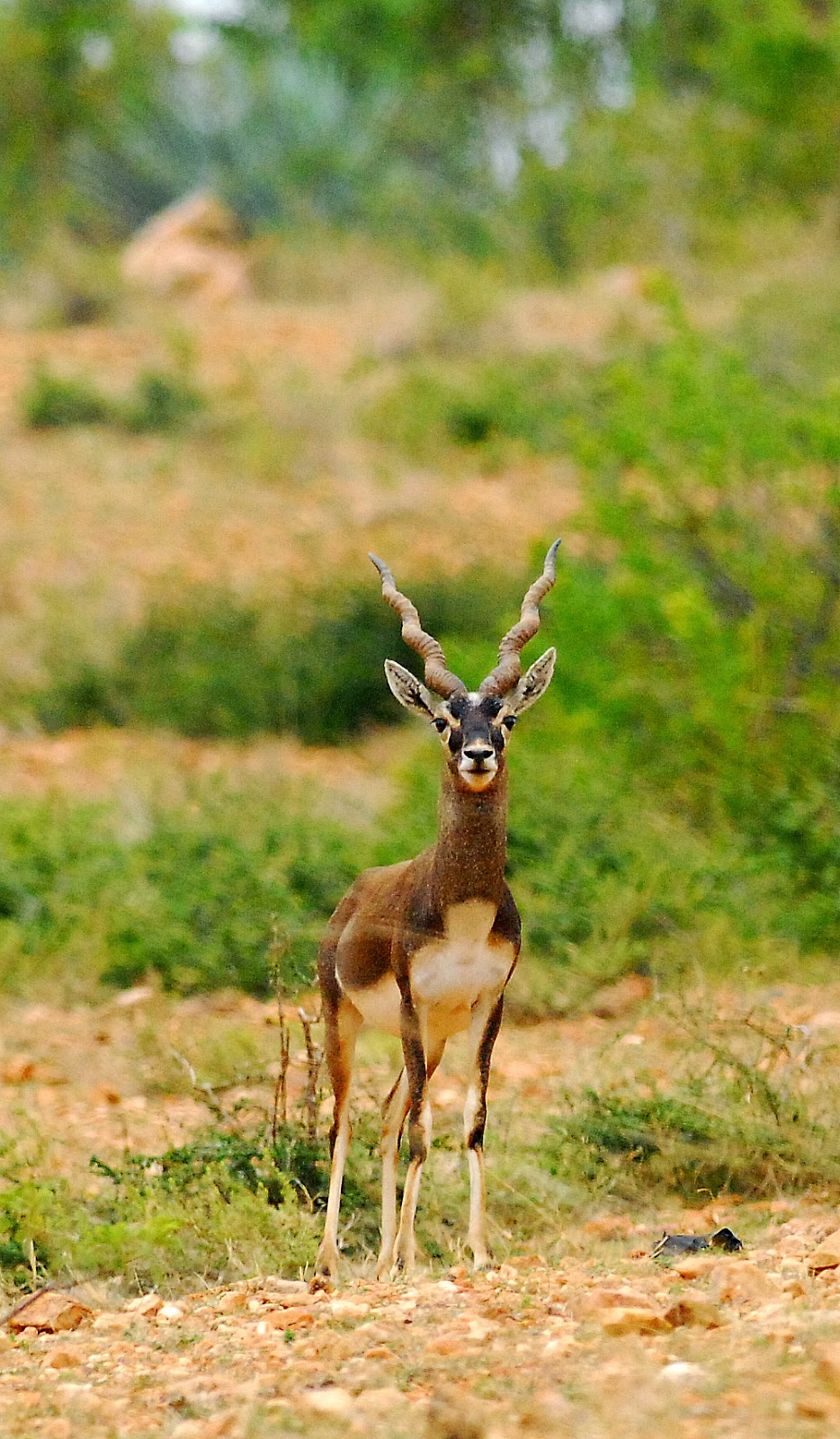 Flora and fauna
More than 80 species of plants have been recorded from this area. Many of these plants have medicinal value.

Butterflies
Sixty-seven species of butterflies belonging to seven families have been sighted in the area. Most of the species recorded are common throughout the Indian Peninsula and some are typical of the arid regions.

Mammals
Jayamangali (Maidanahalli) Blackbuck Conservation Reserve has the second largest contiguous population of Blackbuck in Karnataka, after Ranibennur Blackbuck Sanctuary. In total, 19 species of mammals belonging to 11 families have been recorded in the area, including the Near Threatened Blackbuck. The first ever census of Jayamangali Blackbuck reserve was jointly conducted by the members of WANC and Karnataka Forest Department in the area on 15–16 November 1997, during which a population of 408 Blackbuck was recorded. A subsequent census was held by the above on 1–2 October 2002, which revealed a population of over 600 blackbuck.

Avifauna
About 125 species of birds belonging to 37 families have been recorded in the area, of which 22 are migratory. As expected of grasslands, the area is rich in ground birds, shrikes, larks and raptors. This is one of the few habitats in Tumkur District where the Indian Courser (Cursorius coromandelicus) and Painted Sandgrouse (Pterocles indicus indicus) have been seen. Some of the surrounding villagers claim to have seen the Great Indian Bustard in the past. Although none of the authors nor any birdwatchers have the bird in the area, efforts are on to sight this highly threatened species.

Reptiles
Since it is a grassland, it has quite a number of reptiles typical of dry areas/plains. About 26 species have been recorded in the area, including 14 different species of snakes Note: There are no options for food around the Reserve. So, its better to pack food, if you happen to be in the reserve during the food timings. Also, ensure that you carry sufficient water with you. 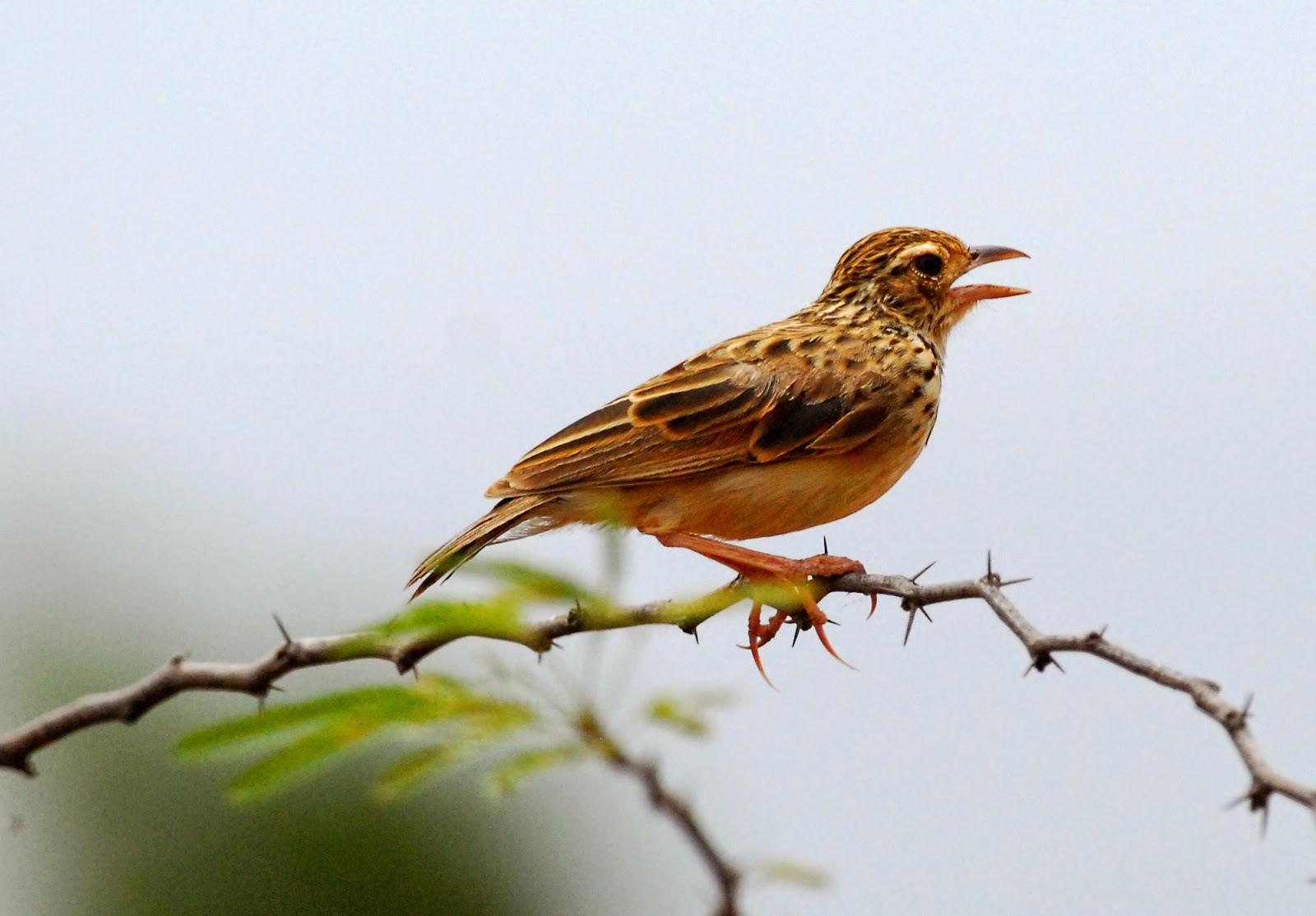 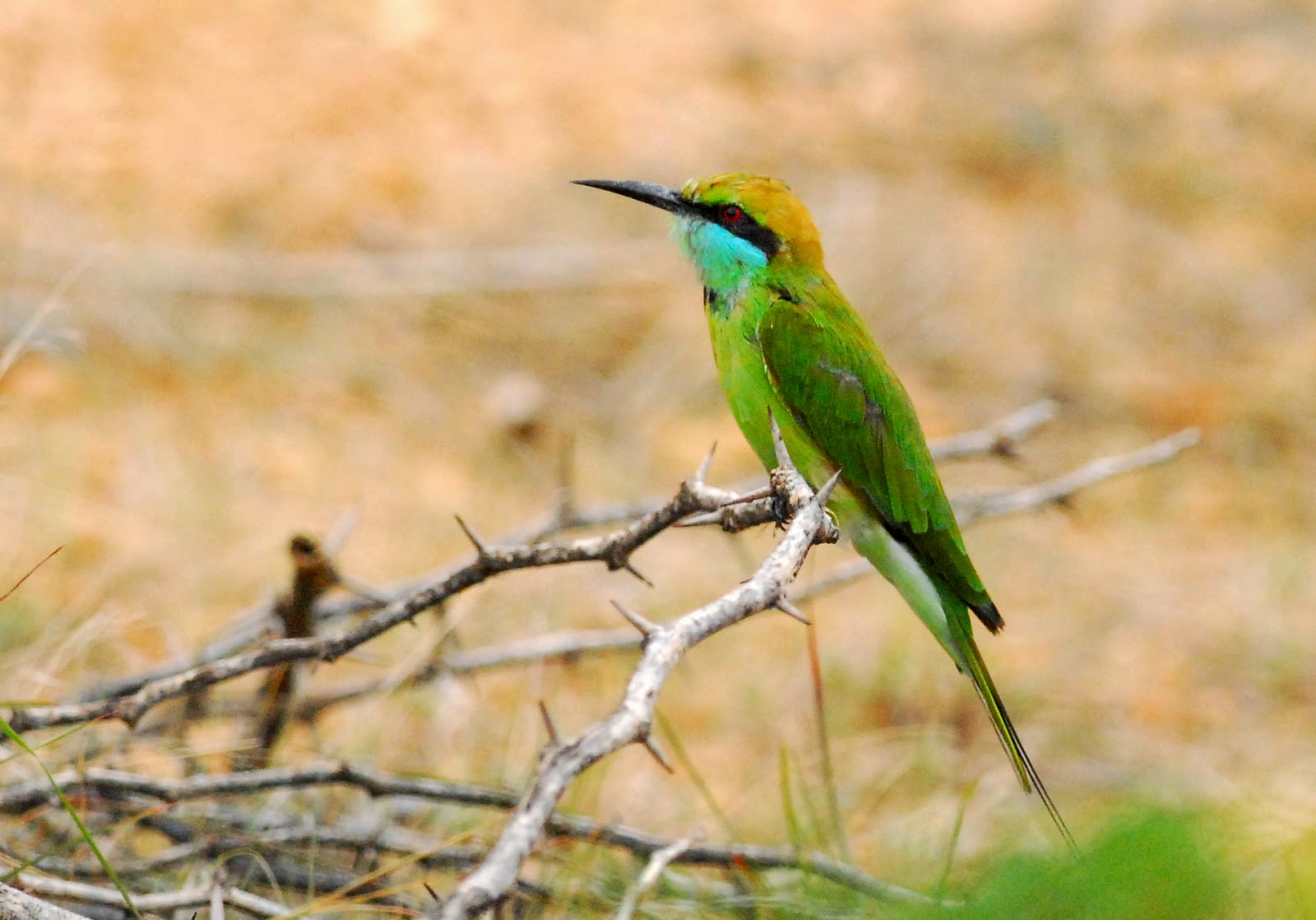 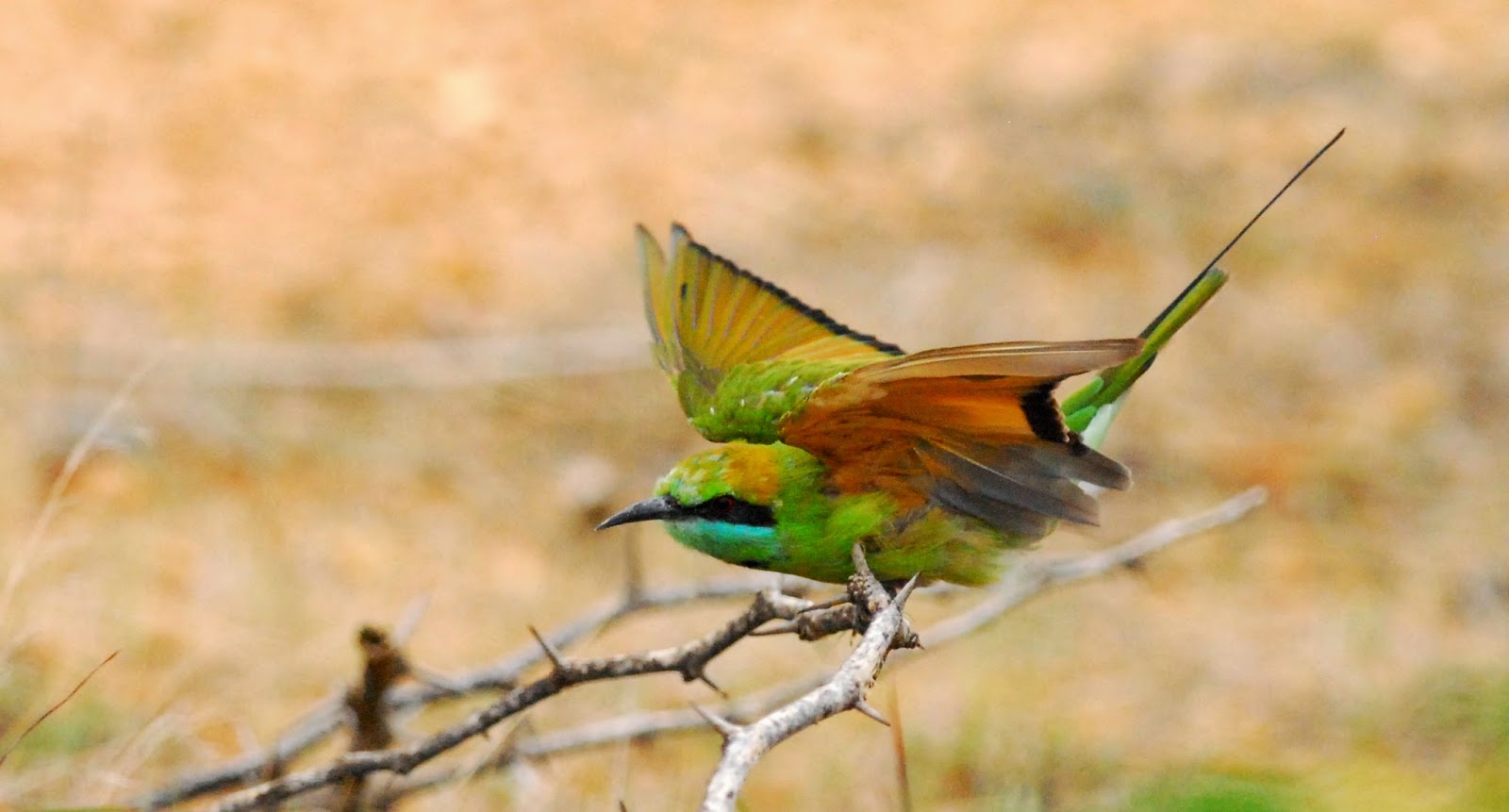 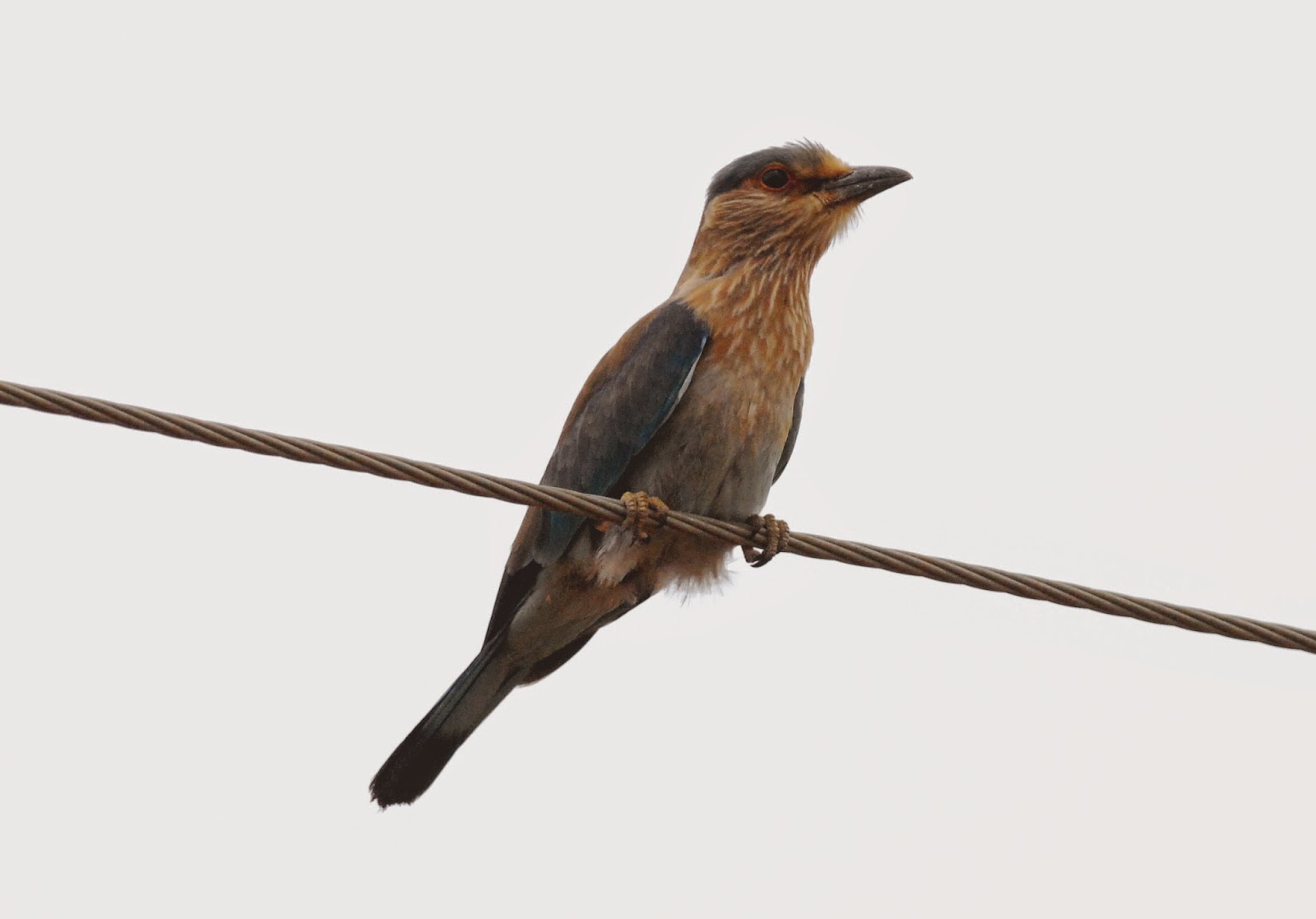 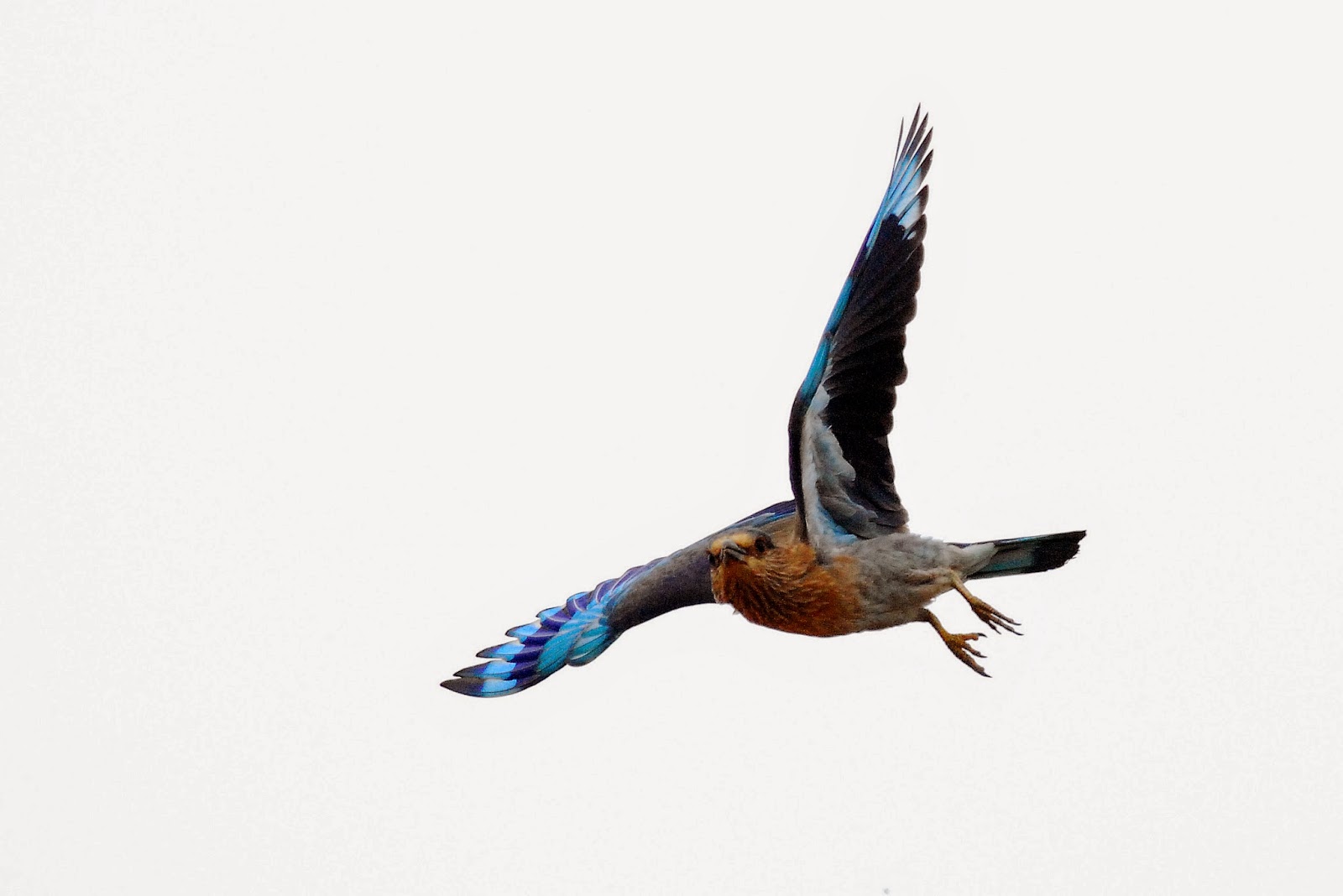 we had  lots of fantastic sightings of birds. from birds like Bushchat's, Robin's, Bee-Eater's, Indian Roller's to big raptors like Honey Buzzard's, White-eye Buzzard's, etc.  on the route

after having lunch we decided to visit HESSARAGHATTA lake, after a few snaps enroute the village life picked some shots enroute 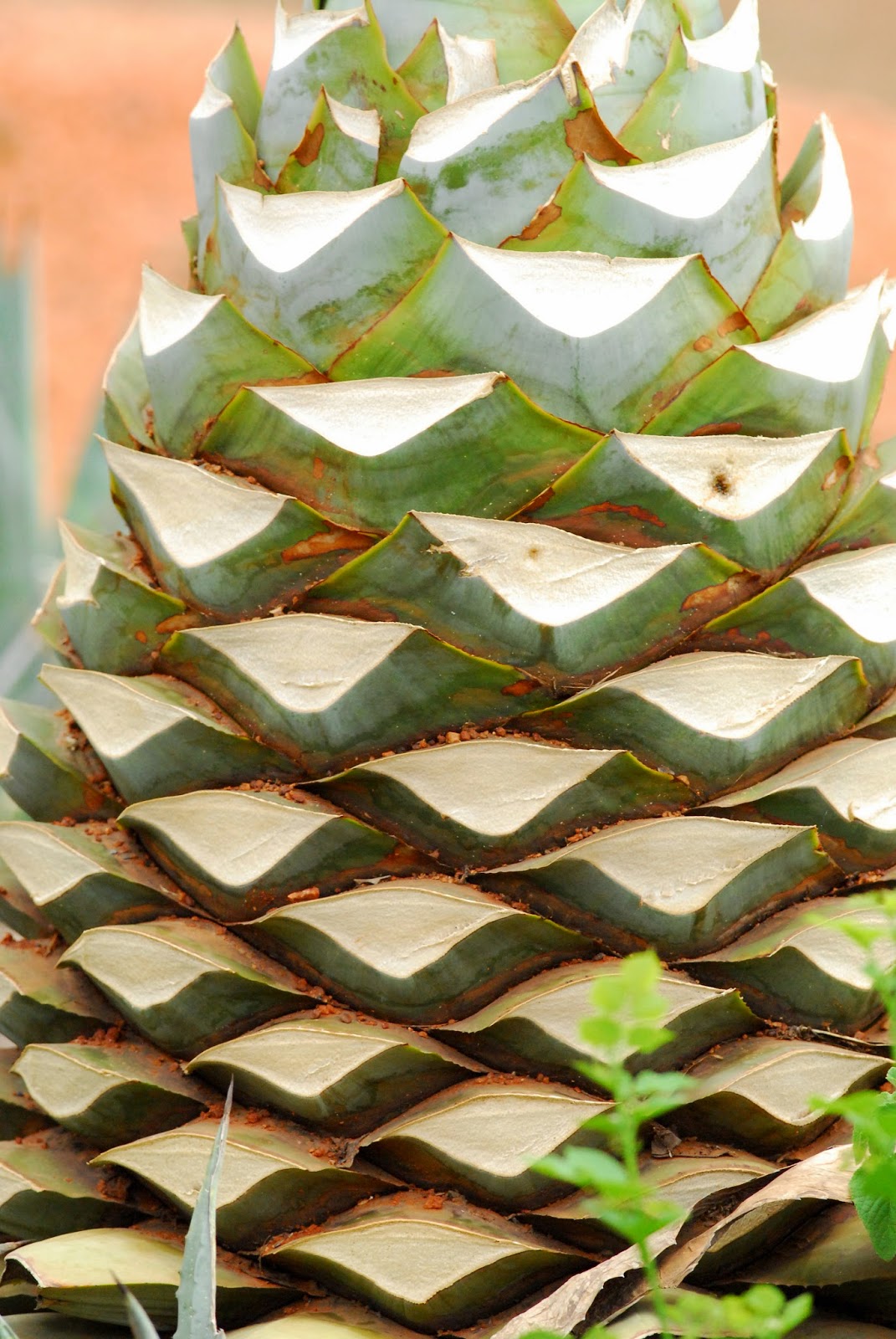 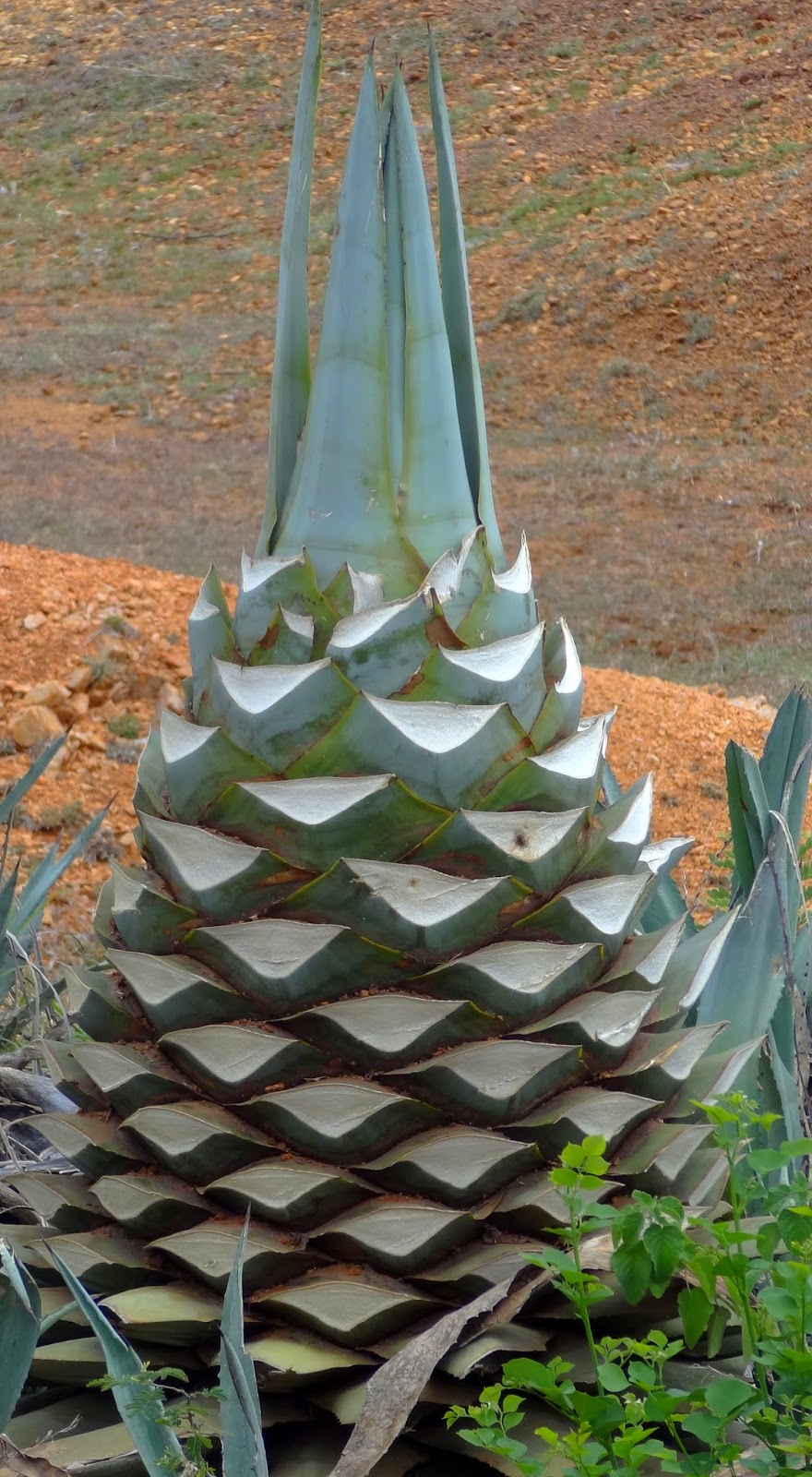 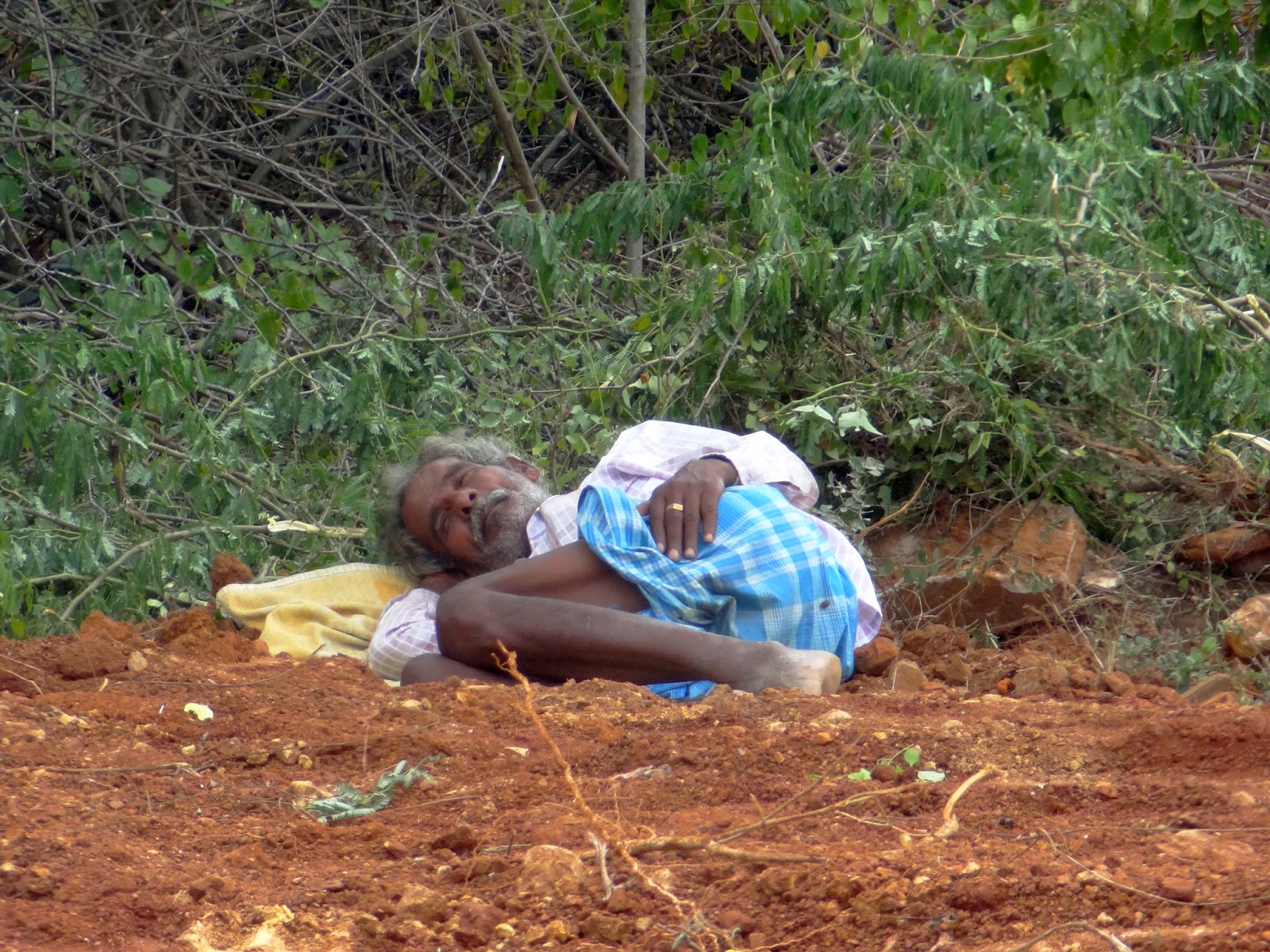 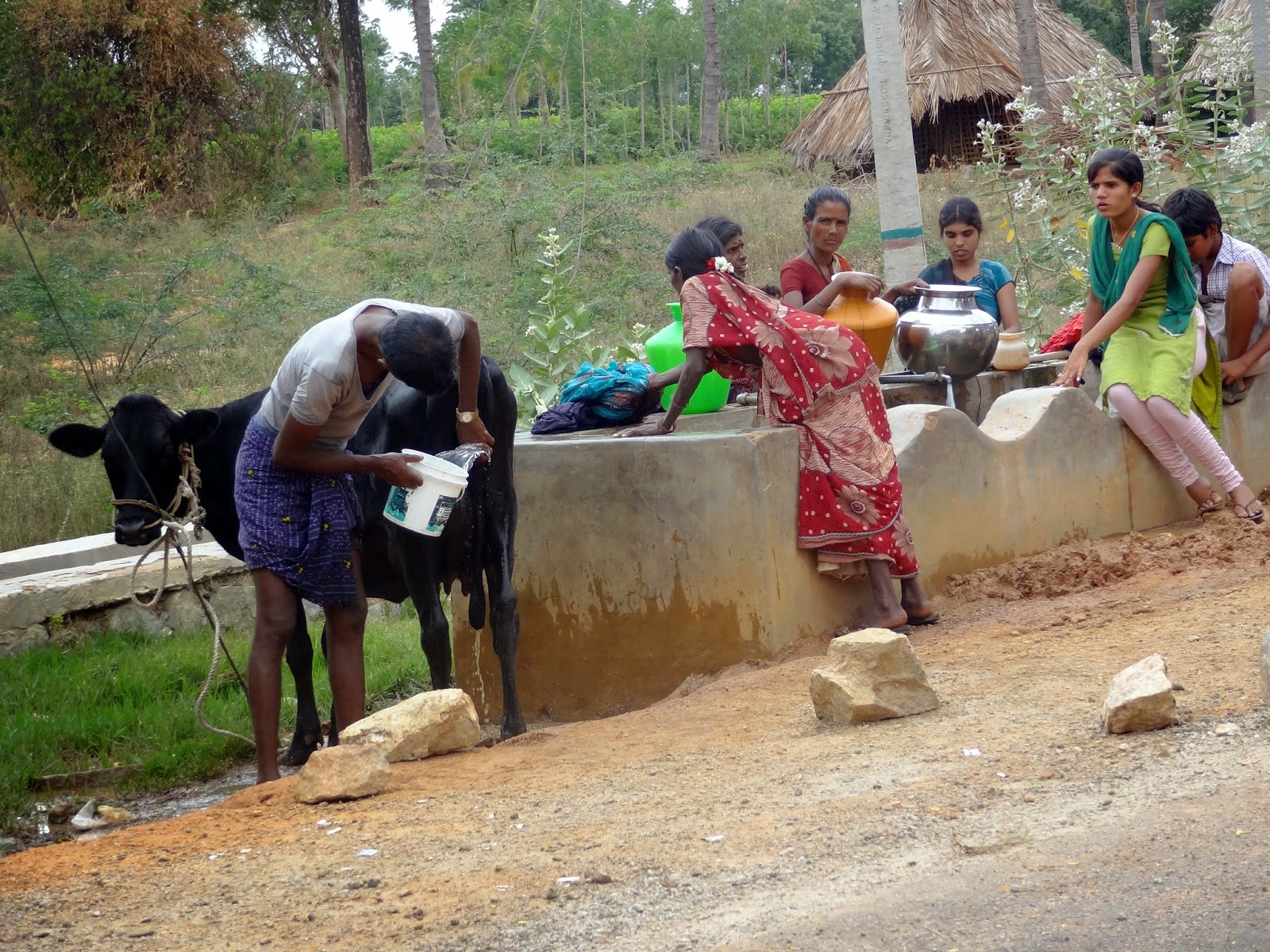 Hesaraghatta Lake is a manmade reservoir located 18 km to the north-west of Bangalore in Karnataka state, India. It is a fresh water lake created in the year 1894 across the Arkavathy River to meet the drinking water needs of the city. Sir K. Seshadri Iyer, the then Dewan of erstwhile Mysore state and the then Chief Engineer of Mysore, M. C. Hutchins, planned to build the scheme called the “Chamarajendra Water Works” to store a three-years' water supply to the city. 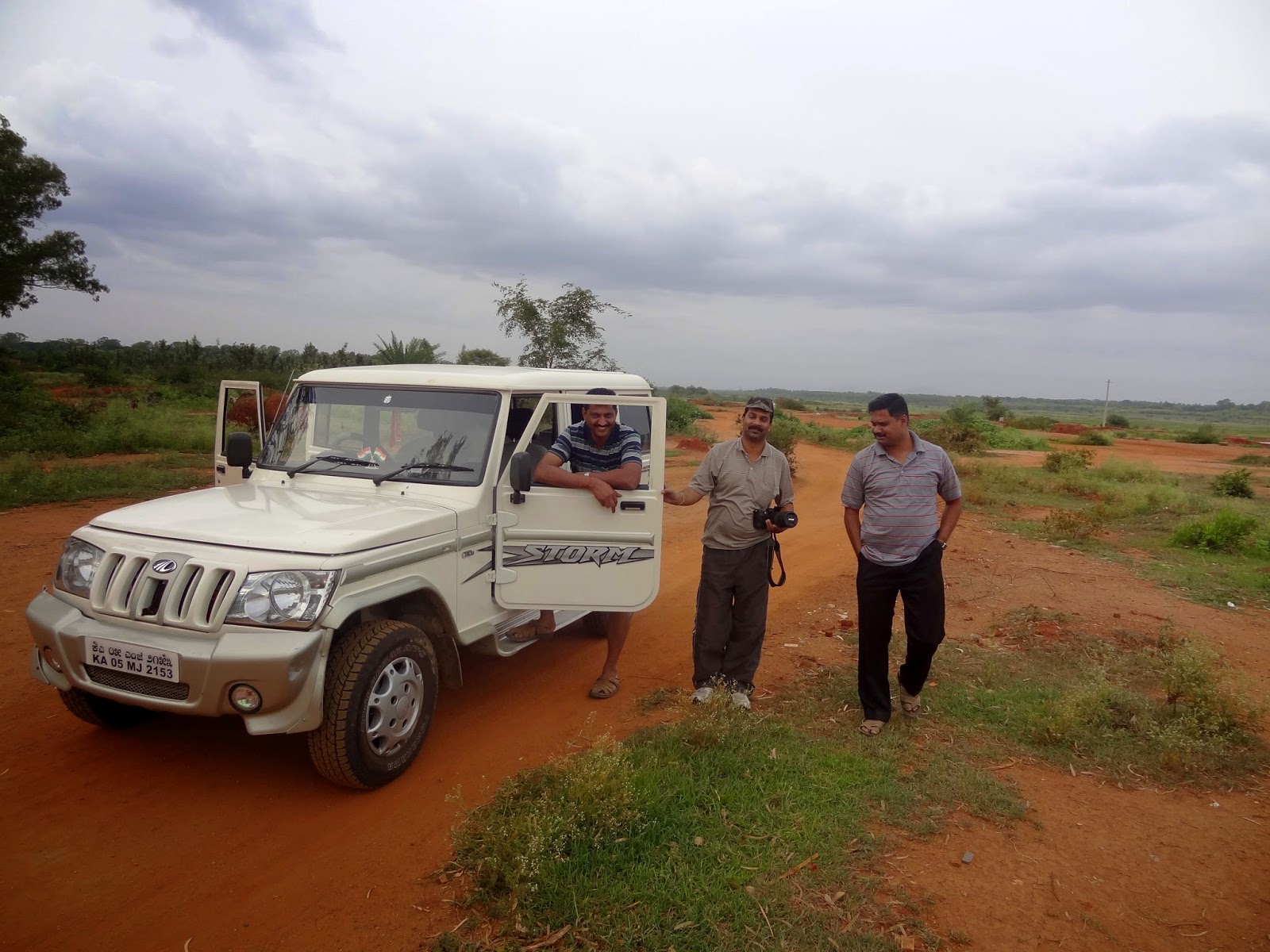 The reservoir is reported to have filled up last in the year 1994 and thereafter the lake’s deterioration and drying up started, reducing its reliability as a water supply source.

The reasons attributed to the lake’s drying up are erosion in the catchment and consequent capacity shrinking due to continuous silting. As of July 2009, the lake is completely dry.

In recent years, the Hesaraghatta Lake bed has seen an increased number of bird photographers who drive on the lake bed using their cars and SUVs as hides resulting in extensive damage to the grassland habitat. This has increased the vehicle tracks to 43 km in total, with the average track width coming to 1.62 meters. About 136 hectares of habitat was either lost or disturbed because of vehicular movement. 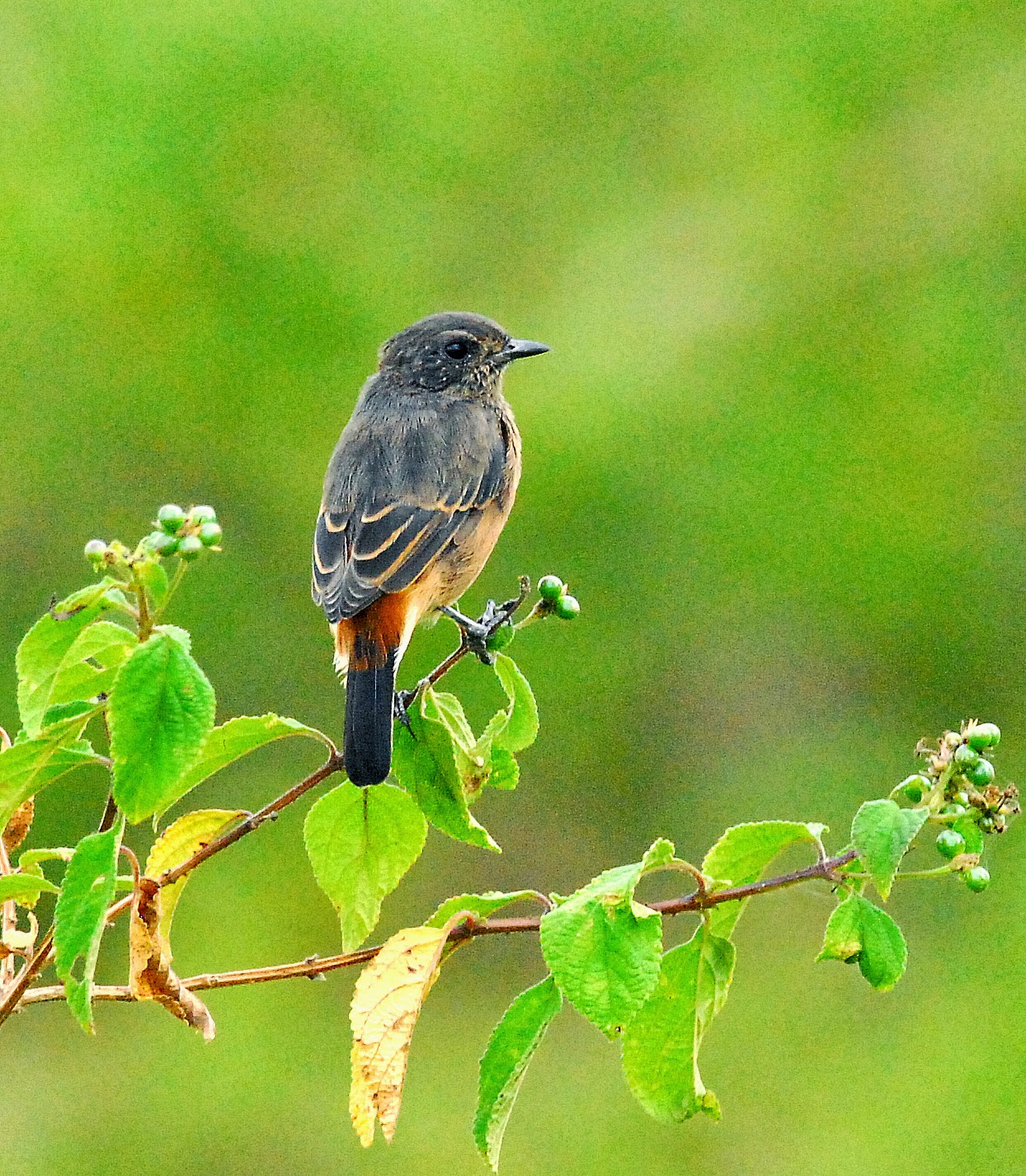 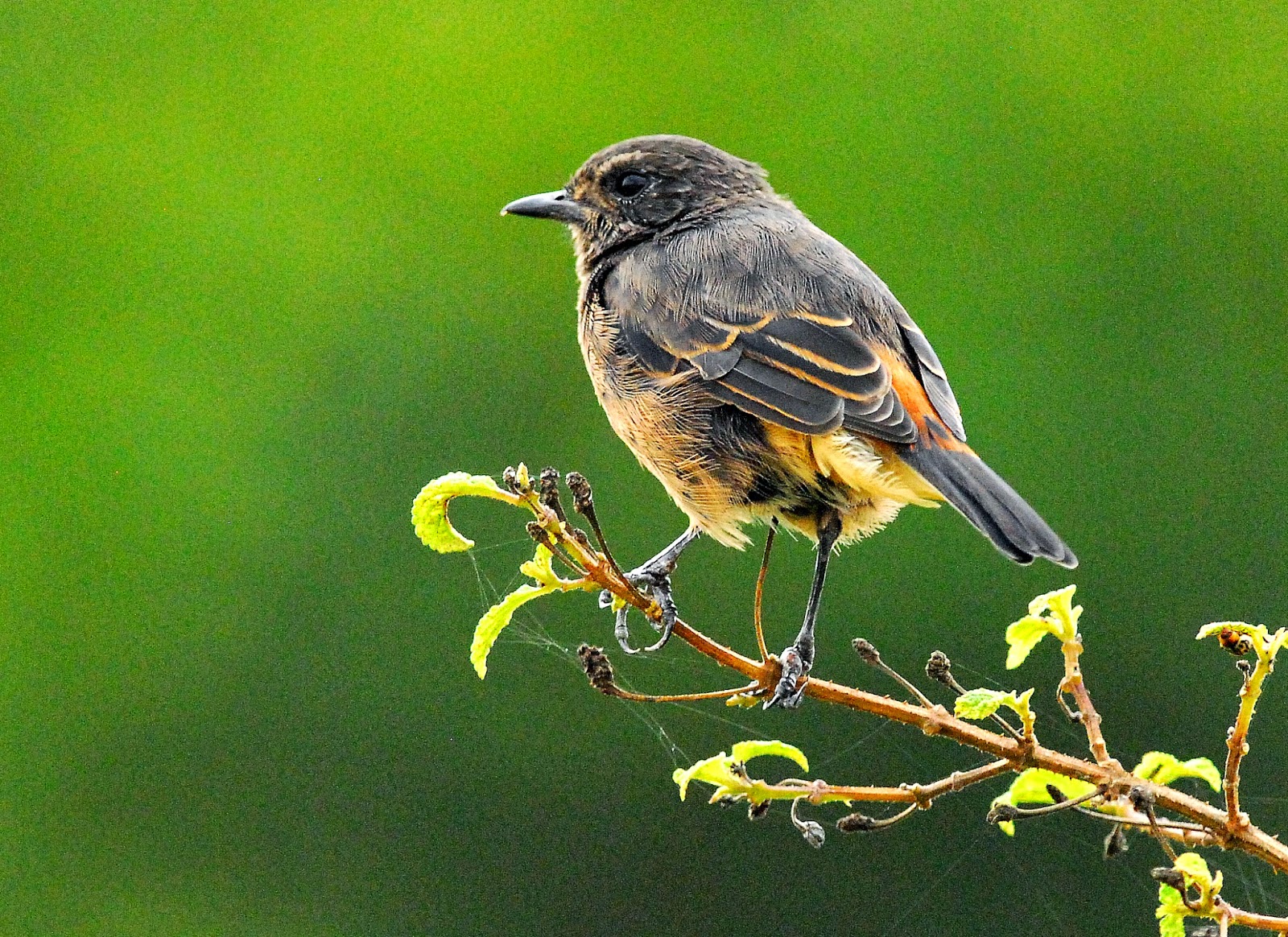 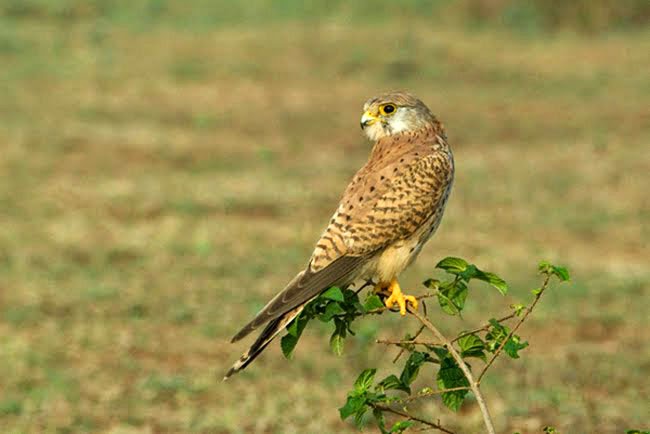 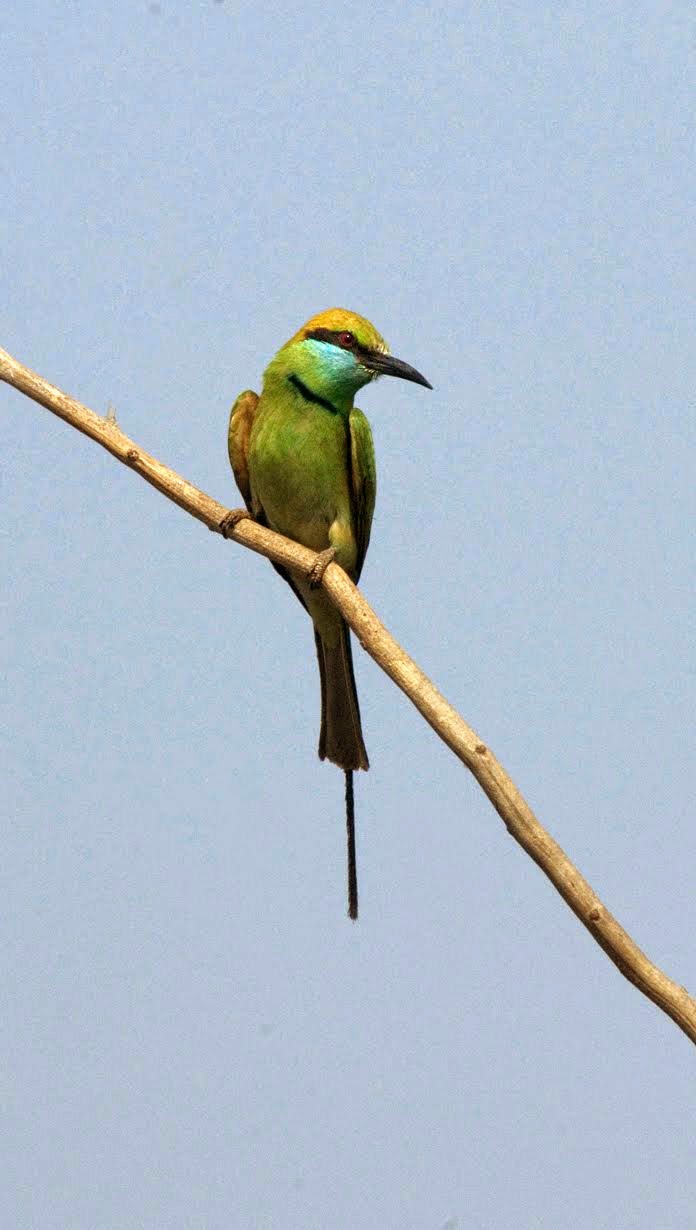